For the ninth consecutive year, Magazine Journalism alumni have 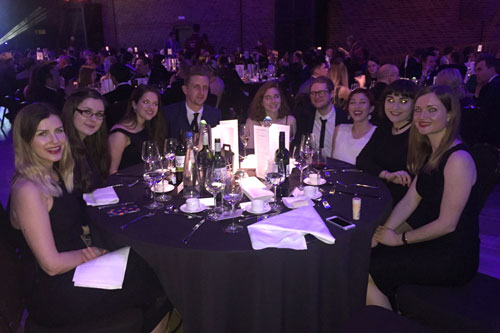 picked up prizes at the 2016 Professional Publishers Association’s (PPA) New Talent Awards. The annual celebration aims to recognise the rising stars of the publishing industry.

Alumni from the 2015 Masters in Magazine Journalism course were named Best Postgraduate Student and Best Graduate Intern in the prestigious industry awards. The Best Postgraduate Award went to Ellie Flynn who is now Digital News Reporter at The Sun. The judges described Ellie’s work as “brave and punchy, underwritten by a style that never falls into cliché.”

Mona Tabbara, Editorial Assistant at Virgin Media Presents, won the award for Best Graduate or Intern of the Year. Mona was described by the panel as “the complete package” and a “genuinely impressive winner”.

We are thrilled that for the ninth year running our students have won these prestigious magazine awards. The competition gets stiffer every year, so it’s a huge accolade and testament to their hard work and the rigorous nature of the course.

The winners were revealed at a ceremony held on Wednesday 9th March at the Brewery.

Most Promising Student of the Year Postgraduate Category

New Editor of the Year

New Section Editor of the Year

New Business Journalist of the Year

Best Graduate/ Intern of the Year

The Professional Publishers Association (PPA) is a publishing industry body that promotes and protects the interests of companies involved in the production of consumer, customer and business media in the UK.