Unitemps offers students and recent graduates the chance to gain paid employment both at City and externally.

Unitemps is City, University of London’s onsite temporary Recruitment Agency. We offer roles at all levels, helping students, graduates and external candidates find temporary, permanent and paid internship roles both onsite at the University and externally with businesses in and around central London.

Your first assignment with Unitemps / eligibility to work check

If your application is successful you will need to complete an Eligibility to work check before you start your first assignment. This will involve visiting the Unitemps front desk with the following documents:

Unitemps of The Year Awards

Unitemps of the Year Awards 2019

Wow what an evening it was...

On Wednesday 20th March 2019 City, University of London hosted the third Unitemps of the Year Awards.

There were some amazing nominations this year and it was brilliant to hear about all the hard work contributed by temporary staff and to learn about how supportive hiring managers have been. 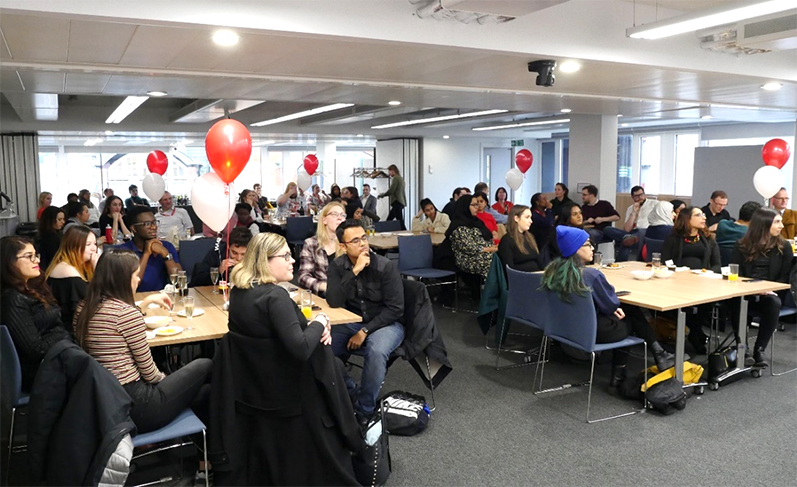 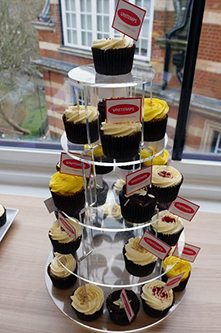 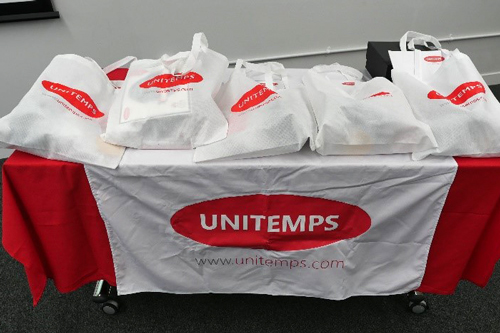 Unitemps (City) are proud of all the individuals that have been placed in roles and of all the managers who go the extra mile to develop their temps.

Congratulations to all nominees and winners this year!

Unitemps of the Year Awards 2019 Runners-up and Winners 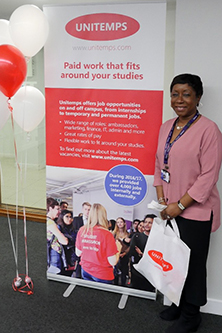 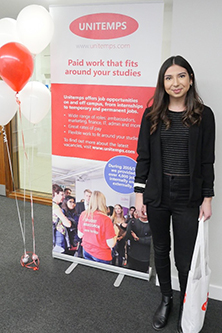 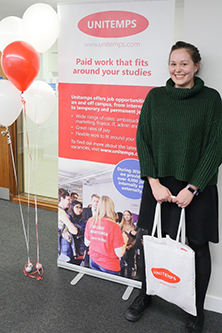 Unitemp of the Year Award

“I would like to say a big thank you to the Unitemps team members for the support and the kindness they have had provided over the course of nearly three years. It has been a pleasure being part of Unitemps. I have thoroughly enjoyed all the roles and assignments up to date, as well as working at the university in various departments with such lovely colleagues and hiring managers who had a tremendous part in my personal development.
I am honoured, pleased and humbled to be chosen as a winner and accept this award!” 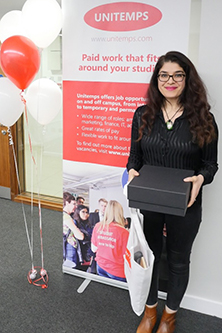 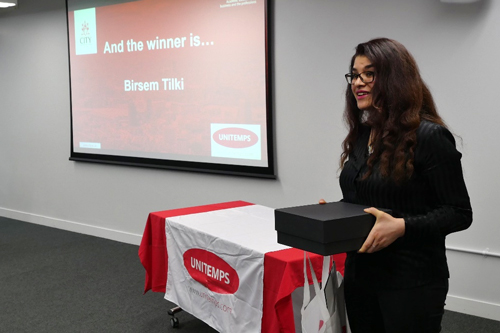 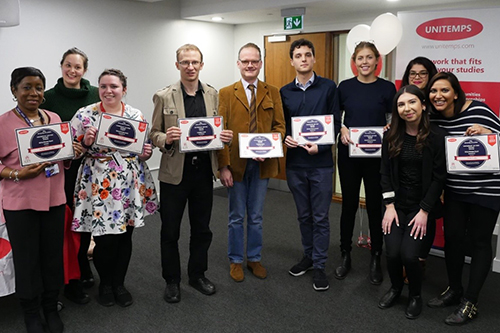 Unitemps of the Year Awards 2018

We would like to say a massive thank you to all those who attended our second Unitemps of the Year Awards at City on Thursday 12th April 2018. We celebrated and rewarded the hard work, dedication and outstanding contributions that temps and hiring managers have made over the past year. 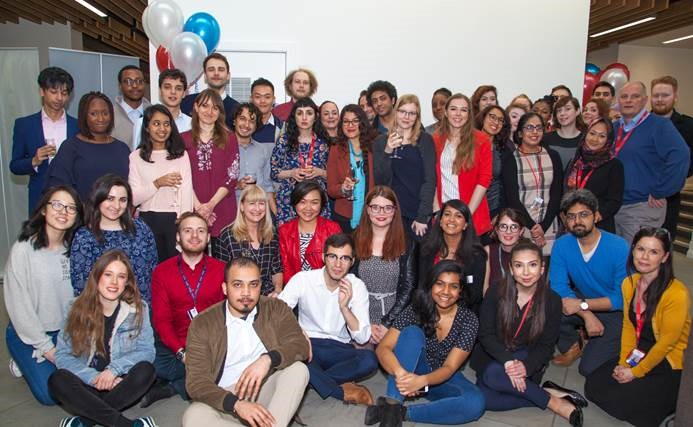 Unitemps (City) are proud of all the individuals that we have placed in roles and of all the managers who go the extra mile to develop their temps.

We would like to congratulate all nominees and winners this year!

Unitemps of the Year Awards 2018 Nominees and Winners 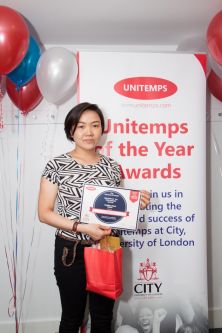 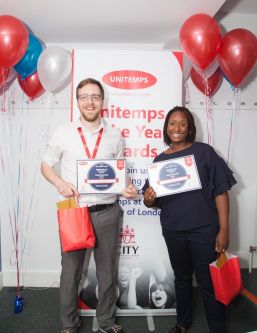 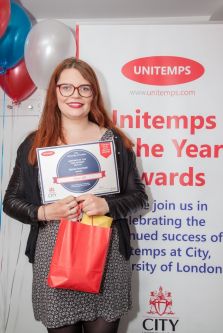 Unitemp of the Year Award

Thank you so much for giving me the award of Unitemp of the Year 2018. I am so grateful.

I would like to thank Unitemps as my employer and giving me the opportunity to work with them. Not only were Unitemps my employer but also my sponsors; helping me to fund my studies.

I would like to thank everyone that I have ever worked with and everyone I have worked for, as you have all given me great memories and helped me to build my character.

For everyone who has worked through Unitemps, this just goes to show how much hard work is still relevant. Always just give your best and push forward. No matter what you are going through there will always be a light at the end of the tunnel. Keep pushing and your hard work will pave way for you!

We look forward to next year’s celebration!

Unitemps at City attended the Annual Unitemps Conference in July 2019 at the University of Warwick.

This is attended by all 15 universities who have a Unitemps branch and it’s a great opportunity to reflect on the latest developments across the network, attend various training sessions and celebrate Unitemps achievements over the past 12 months.

The Awards evening and meal closed the conference and the Unitemps, City team came back with the most prestigious award of the night along with a couple of others: 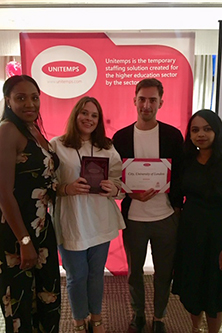 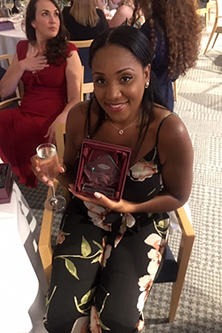 External Consultant of the Year:

Attending the conference was a great opportunity to: reflect on the latest developments across the network, attend various training sessions and celebrate Unitemps achievements over the past 20 years.

The Awards evening and meal closed out the first day of the conference and the Unitemps, City team came back with the following:

Newcomer of the Year:

City, University of London reached £10m turnover since opening in 2012 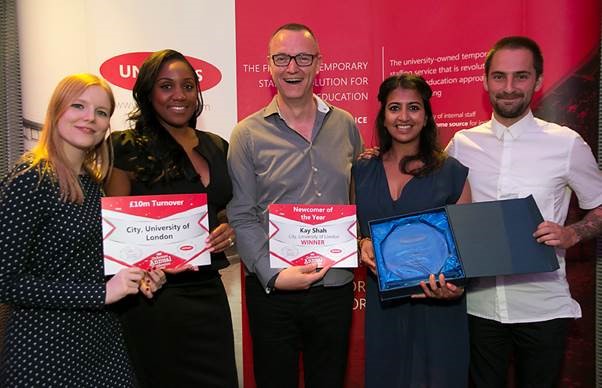 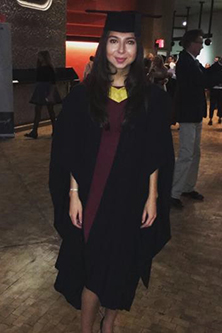 Selin Keskin graduated from City, University of London in 2017 with a 1st class degree in BSc Business Studies. Since then, she has worked in the Careers Service at City as Micro-Placements Programme Coordinator in the Employer

Engagement team. Selin coordinates The Micro-Placements Programme, an initiative that provides students an opportunity to take on short-term, exciting projects at an employer’s office in the summer.

Why did you start temping through Unitemps at City? As a former City student, I was looking a part- time/flexible work to fit around my studies and provide extra income to support me during my time as a student. I approached Unitemps due to the convenience of them being on campus, but also because I learned that they were a service that I felt had the student’s best interests at heart. The first role I applied for was a Marketing Student Ambassador role that fit the specification of the role I was looking for and I carried out this job for the duration of my Undergraduate degree. Moving forward, the simplicity of Unitemps Recruitment platform and the City student specific jobs role encouraged me to apply for further roles thereafter.

What kinds of roles have you taken on in your temping career through Unitemps at City? As mentioned before, my first role as a student was the Marketing Student Ambassador role and the convenience of it being on campus in a familiar environment allowed me to balance my education and work priorities well. Therefore other roles have also been City related such as providing support at the University Open days and Taster days and carrying out campus visits etc. After graduating, I approached Unitemps to build up my work experience and took on a temporary Marketing and Events role in City’s Careers Service and a project coordination role working on a Placements Programme also in City’s Careers Service.

How did the flexibility of temping help you? The flexibility element was one of the main reasons why I approached Unitemps. As my University workload was intense, I did not want to commit to a job that was fixed and could not work around my studies. Therefore, the fact that many of the roles I took on through Unitemps were temporary and allowed me to choose the hours I would work enabled me to balance my studies with gaining valuable work experience and an income concurrently. In addition after graduating, the flexibility of the jobs offered allowed me to again build up my work experience and gain an insight in to different career paths I could take.

What skills has your role(s) through Unitemps given you? I have developed a number of practical skills that have been invaluable for me. The most important ones I would say is project management, administration, verbal and written communication, time management and organisational skills, but the list is endless!

If you could give temps one piece of advice, what would it be? Take full advantage of the Unitemps Service, particularly if you are a City student. There are a number of opportunities Unitemps source that are exclusive to City students which is very beneficial given the competitiveness of the job market. Build your experience and network as you never know where this role may take you. An internship that was meant to last for three weeks ended up becoming a fixed term role that I applied for! Without Unitemps, I may never have had the experience to apply for my current role.

What are you doing now? I am now a Micro-Placements Programme Coordinator in the City Careers service. The programme is an initiative that provides students an opportunity to take on short-term, exciting projects at an employer’s office in the summer. 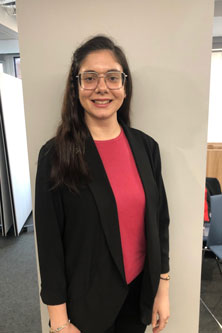 I was in my second year of undergraduate degree and I desperately wanted to find a job. I tried applying in shops, stores, real estate agencies but nothing worked! One hot summer day, I was on campus and I decided to stop by Careers. There I met Kate and long story short, she gave me my first job. I started working for Unitemps in 2012. I was involved in so many different activities that someone asked me if I had a twin sister! I was everywhere!

Unitemps allowed me to study while earning money and allowed me to be on campus while gaining valuable employability skills that guaranteed my first full time job. From helping out in graduation ceremonies to giving campus tours to prospective students and their parents, from calling up graduates to covering the reception desk, to greeting highly esteemed guests in the Vice-Chancellor dinner, Unitemps gave me the opportunity to learn how departments like Marketing, Careers and the Student Centre worked. But most importantly, it gave me a work family and helped me create a diverse career in higher education.

I can share many positive stories about my time with Unitemps, but as we are running out of time, I want to leave you with one thought. As students we have a very specific idea of what we want to do and where we want to go career-wise. Some of you will follow exactly the path you have in mind, some of you won’t. But whatever you end up doing, Unitemps you will give you transferable skills that you can use at any time. Grab the opportunity today! You never know when you will need these skills!

Click here to view our current vacancies on and off campus

Book an appointment to have your CV or application checked by a careers advisor before you apply for a Unitemps role.

Know your rights and responsibilities

Read our advice on employee rights, income tax and national insurance when working in the UK.