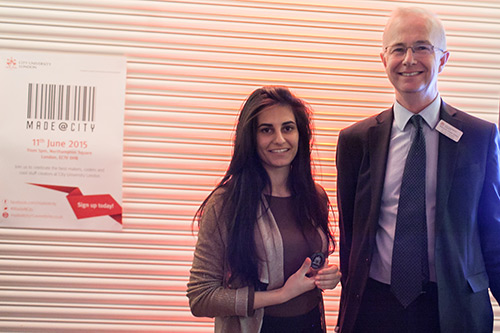 Sara is a 4th year Biomedical Engineering student. She recently took part in the Made@City competition.

The project was to design, build and test a myoelectric prosthetic arm. The control of the movements is achieved via EMG signals which are electronically processed, and programmed in LabVIEW to actuate servo motors via an Arduino microcontroller. The myoelectric arm was made through 3D printing. The fingers are controlled through the biceps and the wrist rotation is controlled using the muscles on the chest.

What was the best thing about taking part in Made@City?

The best part was the experience to talk about my project and seeing people's reactions. The atmosphere of the event was also very enjoyable and not stressful.

How did M@C help with your career prospects?

It has helped me to be more confident in speaking about my project and taught me how to approach people who might be hesitant. The day after the event I had my oral examination in front of the examiners, M@C prepared me well for that.

Tell us a little about what you are doing now.

I am now in my 4th year of Biomedical engineering (MEng). It was a great opportunity to then through M@C be connected to and be part of the TEDx squaremile event that took place at City in November 2015.

What would you say to students who are thinking of taking part in Made@City?

I would like to tell them that taking part in M@C and receiving the recognition after putting a lot of work into your project is rewarding.