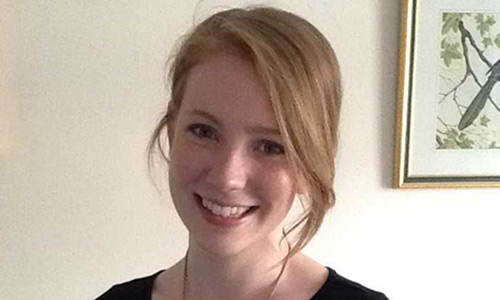 'At first it was something I was always nervous about, but now it excites me that it is something that I will be doing in the near future.'

How did you develop an interest in Journalism and why did you choose to study MA Broadcast Journalism?

During my undergraduate degree I became heavily involved with Warwick’s student radio. I started a musical theatre show of my own and began reading news bulletins. I enjoyed the news side of radio, so in my second year became head of news and had multiple shows a week. My interest in radio and news led to placements at Sky News and BBC Radio 2.
During my work experience placements many people had said I should think about doing a masters, mainly for the media law qualification. Whilst at Sky News almost all of the people working in the planning team had a masters from City, so this is where I got the inspiration from.
After graduation I took a year out to gather my thoughts and earn some money, then in November 2016 I attended the Postgraduate Open Day at City. In March, I then applied for my place and received an offer after an interview in early April.

Why did you choose to continue your studies at City, University of London?

City is the best university for a Masters in Broadcast Journalism. Being in London was always a must for me because so many opportunities for journalists exist here. Within my first week at City I had already been to an event at the BBC and ITV, all because the university was able to arrange these for us. The prestige of the course was extremely appealing to me, and the university has so much to offer in terms of equipment and real journalistic training.

How are you finding the transition from Undergraduate to Postgraduate study?

As I took a year out in between my studies to work, I adapted really well to the change. My previous job was very intense, so I was familiar with working long hours and under pressure. I also worked extremely hard at undergraduate level, so knew how to manage my time well.
The hardest thing for me, was the transition to living in London. I have previously lived in the countryside of Devon and then in Leamington Spa. Adapting to commuting and fitting my lifestyle around that was difficult. It took me a while to settle, but once I had a flat, had joined a gym and had a routine, everything fell into place.

Have you completed any work experience/ placements during your course? Where did you complete these and how will they help with your future career?

Without work placements I would have never began a career in journalism, so I was keen to get even more experience during my course and use the skills I have learnt so far. I worked for a week as a News Intern at Radio Exe, in Exeter. I spent my time finding stories, writing copy and arranging interviews. I became familiar with how to use technical software in a professional environment. This placement was one of the most useful experiences I have had. As they are a small radio station, they were able to give me lots to do and could invest their time in me.
I have also worked for a week with Zig-Zag Productions, London. As a production intern I transcribed film footage and edited camera logs. This placement was different to other ones I have had, as it was not so news based. I enjoyed researching for future commissions as well.
I have a two-week placement lined up with BBC South, two weeks with Sky Sports News and another week with TwoFour.

How have you found the teaching on your course? Have you been involved in any News Days or Major projects?

The teachers are incredibly enthusiastic. Their love of news is obvious, and they are dedicated to helping us become the best journalists. They are always contactable and give their time to all students. I have particularly enjoyed the guest lecturers, including Penny Marshall. We need active, current journalists to learn from. They can explain the current workings of a news room and keep us up to date. Although our teachers have been successful journalists, it is good to have these guest lecturers.
I have been heavily involved in news days, both on the editing and production side. During TV news days I have had roles as a presenter and technical director. On the radio side, I have been a web editor and desk operator. These days have been invaluable to my learning. I have been able to explore job roles I have never previously considered and gained huge experience working with a team to a deadline.
I am currently working on my final project and have decided to work with film. Although radio was the reason I started looking into a career in journalism, I thoroughly enjoy working with picture.

How have you benefitted from the facilities at City? Do they help you to practice and prepare for your future career/study?

City’s Journalism Department has incredible facilities. This is the main reason I chose to study here. It has been wonderful getting full training on Adobe Audition and Adobe Premiere Pro, both of which I had barely used before. Although I had used a Tascam previously, it’s been useful learning with different audio equipment and learning how to use a camera. I know that news radio rooms use Burli software, so it has been important for us to get to grips with that. I have loved the course because of how practical it is. We have been able to try out different elements of being in a news room, and I particularly enjoyed my role as technical director for a TV news day.

What are you planning to do upon graduation from City?

I have work experience planned over the next couple of months whilst I am still at City, so I am hoping that this might develop into a job. If not, I shall begin applying for jobs around May/June time, so that as soon as I leave university I can start working as a Journalist.