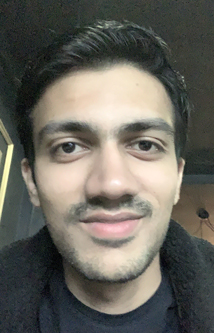 When you’re studying at City everything is at your doorstep. You’re right in the middle of London

As I was just starting my final year of A-Levels, I received my AS results and to my surprise they were excellent. Sometime later, I was contacted by a family friend who introduced the idea of studying abroad and he assured me that I would be able to gain admissions into foreign universities because of my exceptional grades. My family also assured me of their support in my decisions. I started exploring opportunities in the UK and applied to universities with most of them located in London and a few in Manchester. In the end, I decided to choose the vibrant capital because of its extremely diverse culture and the fact that there is just so much to do in London!

What were the factors that influenced your decision to study at City in particular?

The central location of City was one of the most important factors to influence my decision to come to City. There is so much to do in central London and you have everything you need nearby. Moreover, Cass Business School at City is highly reputed, and I wanted to go to a business school that was not only well-known but also offered flexible degree programmes where you can choose your own electives.

What were the most important resources for you in helping you to decide?

After I received unconditional offers from several universities in the UK, I started to narrow down my options. I spoke to several alumni from City and Cass and they had many good things to say about City and Cass both! This was probably the biggest factor to influence my decision. I also made use of the online rankings of the university and the business school before finally deciding on City.

When the time came to board my flight and leave everything behind, I started having mixed feelings since this was the first time I was moving away from my family and stepping outside my comfort zone. It was challenging adjusting during my first week and to the fact that I didn't know anyone in London and was basically on my own for the first time in my life. There were no relatives to help me out and I felt a little helpless too. After I had arrived to my accommodation at City and finished unpacking and setting up the interior, it hit me that I didn't really know anyone in my building. When I did meet my flatmates, I realised that they too were in the same situation as me so we all helped each other make the transition to our new life in London easier. City also helped us settle down by hosting a Welcome Week where we met different students from all over the world and made new friends.

The first thing that struck me about London was its vibrant scenery and bustling atmosphere. For the first time in my life I saw so many people walking, and what I really loved was that you could step out and walk any time of the day and be mesmerised by the picturesque streets of London without getting bored. When you’re studying at City everything is at your doorstep. You’re right in the middle of London and whenever I felt like I needed a break from the university, I could just hop on a bus and zone out. The public transport links were unlike any I had ever seen before; they are so efficient and I could reach practically anywhere in London. I was thrilled to find that the University was located by many iconic landmarks and the nightlife exceeded my expectations too. I couldn’t believe I was now known as a ‘Londoner’.

Winter had arrived when I got to London so the days were getting shorter and the weather was getting cold. I utilised this time to explore a different side of London – I enjoyed indoor activities such as London’s museums and exhibitions which allowed me to learn more about the history of the city. When I first arrived to London, I didn't really know anyone but after the first few weeks, I met a lot of new people at City and made friends with people from all over the world. Some of my friends were British so they helped me adapt to the city and showed me around. I helped myself settle into London life by constantly exploring the city and involved myself in opportunities to meet new people. Seeing things from their perspective really allowed me to adapt to this extremely vibrant and diverse culture.

What do you do when you’re not studying?

Most of my free time is spent either at CitySport working out or at the local football pitches in Islington playing a round or two of football with my friends.

What opportunities and experiences City has offered you?

The Career Fairs that City hosts every year is amazing and through my interaction with employers on these fairs I have successfully expanded my network and made invaluable connections. Moreover, City’s Careers Service department has offered me opportunities to increase my employability through mock interviews and guidance on assessment centres. They also offer resume and cover letter checks and this has helped me a lot in job applications.

Leaving home is always a difficult decision but making the decision to step outside your comfort zone can help you evolve in more ways than you can imagine. I highly recommend taking the chance to study in London, you'll be surprised by what this city has to offer. You will meet people from all over the world and hear their stories and there is just so much to do in London, from exploring iconic landmarks to just enjoying a coffee in a cafe on a busy high street. Take this opportunity and you will definitely not regret it!