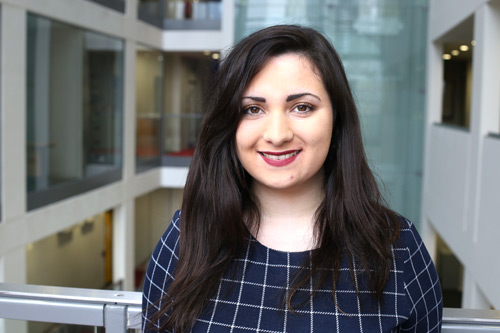 Chiara is journalism graduate originally from Italy. She chose City for its renowned Department of Journalism and strong employability prospects.

Before moving to London to study at City, I was in Italy (where I come from) studying for my high school qualification. I studied subjects such as Latin, Greek and Literature, along with English, Mathematics and Science.

What made you apply to City?

Its reputation for academic excellence, the high rate of alumni finding a job within six months after graduation, great professors and courses.

In particular, I was interested in Journalism, for which City is one of the best universities in the UK and all over the world. When I learnt more about the BA Journalism, I knew it was a great course, one that was really worth moving abroad for.

What were the most important resources for you in helping you to make a decision?

Visiting the university and talking to current students. When I entered the Department of Journalism for the first time, I completely fell in love with it.

Once you'd received offers from different universities how did you make your decision to choose City?

City was my firm choice and it was the only university I was really hoping to get into, so I had basically decided I would have chosen it despite any offers from other universities.

My favourite thing about studying Journalism at City was that this course, with its great professors and modules, prepares students for their working life and gives them a lot of opportunities to succeed in their dream career. It combines theory and practice, giving a great overview of what working in this field actually requires.

Also, City is a very international university, which is something I really love.

What kind of things were you involved in outside your course?

I was a student ambassador and I often worked during events, such as Open Days, Applicant Days, school visits and so on. I really enjoyed doing it as it is a really rewarding experience. I also met great friends while working.

Have you had the opportunity to do any internships or work experience?

I have done a lot of internships, from local newspapers, such as Islington Gazette and Hackney Gazette, to national newspapers, such as The Times. I have also worked for a radio and for several magazines. The experience I got has contributed to building up my CV and has given me a lot of confidence to enter the world of work soon.

Be confident, passionate, enthusiastic, believe in yourself and you will get everything you deserve.