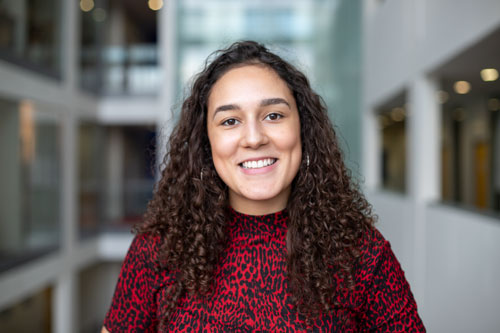 Ayshea is a 3rd year BSc Midwifery student. As a co-captain of City’s Netball Team, she is leading the team, organising matches and socials.

Before attending City, I was studying for my A-levels at sixth form in History, Psychology and Biology. I also had leadership roles within my sixth form as Deputy Head Girl and I played for a local Netball Club in my free time too.

Why did you decide to apply to study at City, University of London?

I decided to do a Midwifery degree and, from my research, London hospitals would give me the best exposure to all walks of life. Also I wanted to live in a big city as I am from a small town in Wales, so the location was perfect for me.

What is your favourite thing about studying at City?

My favourite thing about City is that the modules have been engaging and the lecturers are always there to answer questions.

What kind of things are you involved in outside of your course?

I am the Co-Captain of the City’s Netball Team, which involves me leading the team, organising matches and socials.

What do you plan to do after you graduate?

I plan to apply for a job as midwife in the hospital where I am based now, as they have given me good support throughout the past three years. I would also like to join a Netball Club as sport has always played an important role in my life.

What would be your top tip to our applicants?

Have confidence in yourself when applying to courses as this will shine through when doing your interviews.