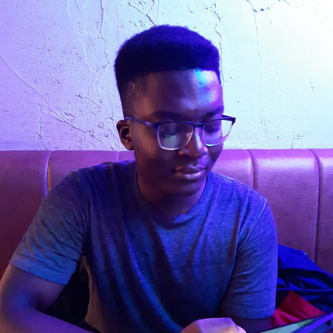 Ayo chose to study Computer Science with Games Technology at City because of the university’s links to industry and focus on graduate employment.

Why did you choose City?

I chose City because it was the best London university where I could study Computer Science, with a major game development portion. As well as that, the university’s links to industry and focus on graduate employment were attractive to me.

Why did you choose to study Computer Science with Games Technology?

What has been your favourite module to study?

My favourite module so far has been Programming in Java, which I did in my first year. It was my favourite because we essentially had free rein to develop a 2D game, and I got a chance to be as creative as I wanted to be, and display some of my animation skills at the same time!

What did you think of the facilities on offer at City?

I feel like the facilities are exactly what my friends and I need, both for productivity and relaxation. The libraries and bookable study rooms are great for working quietly/in small groups. Places like the booths in the Drysdale Building have screens, which make sharing media from laptops super easy.

I think City’s location, between Angel and Farringdon, with so many transport links to different parts of London, make it unique. As well as that, I think the environment of City is really calm and welcoming, in a way that other universities aren’t.

Your opinion of London

What do you enjoy most about studying in London?

It has to be the fact that there are so many London-specific opportunities and events that I can access so easily. I grew up in London, so I feel at home going to uni in the city. I’m close to my family and friends, and in reach of so many amazing tech companies who are based in London.

What do you get up to outside of University?

Outside of university, I play a lot of video games (hence the choice of course!). Beyond that, I draw a lot, create animations, read and watch a lot of films. I’m always in and out of cinemas.

What are your plans for after graduation?

After graduation, I hope to land a graduate role as a game designer, at a game development studio located somewhere in or around London. I’d love to continue living in the city.

How has City helped you to prepare for life after graduation?

What would be your tips for those who have applied to City?

I would say, take advantage of being one bus/train away from so much of London and explore the city. Find the cinemas and theatres, the restaurants, the nightlife. It’s so easy to find great ways to spend your time when you’re not at uni. As well as that, find a good place for you and your friends to hang out when you’re not working. There are a lot of places on campus, so you’re bound to find one that works for you. Finally, just enjoy it as much as you can. Get involved with a society or two, and put yourself out there wherever you can.