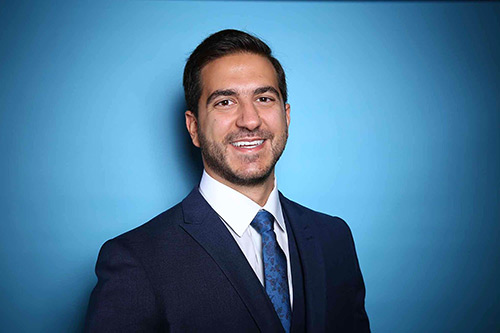 Akef, a lawyer from Beirut, developed a passion for commercial law and chose City, to develop this further, by embarking on our LLM programme. He has been registered before the Beirut Bar Association since 2013. Akef studied the LLM in International Commercial Law at City, graduating with Commendation in 2016.

Here he explains why he chose City to enhance his knowledge of this area of law.

Why did you choose to study for a Master of Laws (LLM)?

I studied my LLB at the Lebanese University in Beirut, and ever since my second year in college I sought internships in the legal field. However, promptly following my graduation, I became a trainee lawyer at a Tier 1 law firm in Beirut. Throughout these years, I developed a passion for commercial cases as well as banking and finance matters, henceforth I decided to pursue my studies and to specialise in that area of the law.

Why did you choose City, University of London and The City Law School?

With that being said, I decided to pursue my post-grad studies in London. Thereafter, choosing City, University of London was quite an easy choice for many reasons:

Which modules did you choose and why?

My dissertation was in International Commercial Arbitration and was titled: "Recognition and Enforcement of International Arbitral Awards in the Middle East, specifically: United Arab Emirates – Kingdom of Saudi Arabia – Lebanon".

I chose these modules, because I was keen on understanding the commercial, banking and finance aspect of the law. These modules were perfect for me, and tailor made for any person seeking to follow the same pattern as mine.

What advice or tips would you give to anyone who wants to study for a LLM?

Definitely do it! My contentment alongside my pleasure of having chosen to do this programme at City is firstly second to none, and secondly growing with every day that goes by knowing how many opportunities it has created and how many doors it has opened to me. Don’t second doubt it for a second, and choose The City Law School particularly as it is now part of the University of London. Such a merge is undoubtedly an added quality that would benefit both organisations greatly.

What are doing now?

I am currently working as an associate in the corporate, M&A and banking and finance practices of Alem & Associate, an international law firm, located in Beirut – Lebanon. My particular focus at the Firm is on Islamic finance and capital markets in the Kingdom of Saudi Arabia as I handle cross-border M&A and private equity work for the region.

With branches in Beirut - Lebanon; Riyadh - KSA and Dubai – UAE, the Law firm Alem & Associates was ranked in 2017 by Chambers Global as a Tier 1 law firm in two practices them being: Corporate & Finance and Dispute Resolution; making it the best law firm in Lebanon and a leading one in the Region.

As for my future plans, knowing that I have a weak spot for the City of London, I reckon I’ll be back there one day, hopefully, thanks to City.