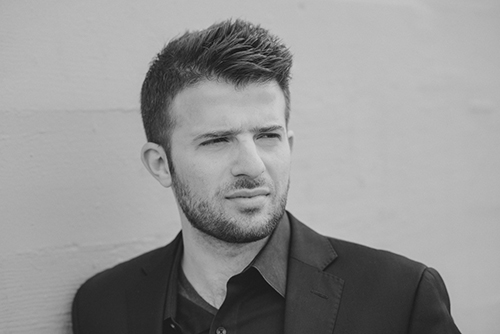 Honorary Research Fellow in the Department of Music

Dr. Antonopoulos obtained his PhD in Musicology from City, University of London, writing the first full length study on the fifteenth century composer, choir director, and theorist, Manuel Chrysaphes. While at City, he was awarded a University Studentship (2009-2012) as well as grants from the Higher Education Innovation Fund (2013) and the AHRC Cultural Engagement Fund (2013). He was a Visiting Lecturer at City, teaching two semesters of ‘Materials of Tonal Music,’ as well as a regular Guest Lecturer for ‘Introduction to Ethnomusicology.’ He won the 2014-15 Mercer's Company prize for academic excellence in recognition of his outstanding doctoral thesis.

Dr Antonopoulos is founder and director of the vocal ensemble Psaltikon, which recently released the world premiere of the seventh-century Paschal Canon, in advance of its first international performance tour in May 2017. He is a regular singer with the internationally acclaimed ensemble Cappella Romana, with whom he has appeared at the Utrecht Early Music Festival, the Metropolitan Museum of Art in NY, and BBC Radio 3 with Sean Rafferty. A graduate of Brown University and the New England Conservatory, he has appeared as tenor soloist in operas and recitals of classical music, in addition to performing with a variety of world music ensembles, throughout the US, Europe, and the UK.

Dr Antonopoulos has spoken at dozens of international academic conferences on medieval Byzantine chant, archaeoacoustics, and music and identity. His publications include forthcoming articles in Dumbarton Oaks Papers, Speculum Online, and Hesperia. He is currently a collaborator on Stanford’s Icons of Sound project as well as UCLA/USC’s Soundscapes of Medieval Byzantium. Both are interdisciplinary projects that focus on the intersection of sound, space, and liturgy in the medieval world. Recent performances include a modern reconstruction of music from the Asmatic Rite of medieval Constantinople in Stanford’s Bing Hall with Cappella Romana (November 2016) and an acoustically curated concert of medieval and modern Byzantine chant at Saint Sophia Greek Orthodox Cathedral as part of USC’s series Visions & Voices.

Title: The Life and Works of Manuel Chrysaphes the Lampadarios, and the Figure of Composer in Late Byzantium

Summary: This thesis is the first full length study devoted to Manuel Chrysaphes, a fifteenth century composer, theorist and singer, who worked in the imperial court of Constantinople as a director of the palatine choirs under the final two emperors of Byzantium. He is the author of at least three codices, a theoretical treatise and approximately 300 chants, which range from simple psalmody to virtuosic chants composed in the florid, kalophonic style. A detailed analysis of Chrysaphes' settings of verses and troped refrains from Psalm 103 not only serves to update our knowledge of evening worship in Late Byzantium but also leads to an understanding of the identifiable elements of Chrysaphes' style as composer. Chrysaphes took the kalophonic tradition he inherited - a tradition of elaborate psalmody in which individual composers figured prominently - to its logical extreme, filling out repertories with his own compositions, innovating in certain areas, and defending the traditions of his predecessors elsewhere. Chrysaphes operated first and foremost as a self-consciously authorial composer. His prolific activity as author of hundreds of veritable 'art works' nevertheless leaves us with the impression that these were not detractors from, but rather, instruments of worship and spiritual perfection.