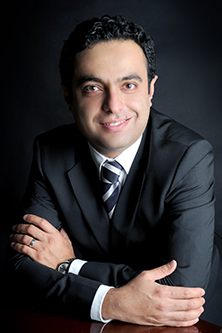 From 2007 to 2017, Ehsan worked at City, University of London as the Founding Director and Head of Dubai Campus.

Ehsan is a leader with strong entrepreneurial skills and talent for start-ups and new business development. His management work experience has been in higher education, family business, charity and not-for-profit, consulting, auditing, and project management in a number of countries including the United Kingdom, United Arab Emirates and Germany. Some of the organisations that Ehsan has worked with include London Business School, Dubai International Financial Centre Authority, United Nations, Family Offices, Westminster Partners Group, London Institute for Banking and Finance, Advanced Institute of Management Research and Cancer Research UK.

Ehsan is an alumnus of City, University of London, having completed a Master of Science in Auditing & Management. His degree’s dissertation was about the university’s expansion to the MENA region in general and Dubai in particular. In 2012, Ehsan completed the Entrepreneurial University Leadership course, which is a pioneering executive development programme for senior university leaders offered by University of Oxford, National Centre for Entrepreneurship in Education (NCEE) and Universities UK (UUK).

In May 2011, Ehsan received the City, University of London’s award for his outstanding contribution to establish and the significant growth of the university in the MENA region.

He served on the City, University of London’s MENA board and the committees of the UKTI Higher Education in the UAE, Capital Club and UK-UAE Financial & Professional Services.

In February 2016, Ehsan was awarded Freedom of the City of London.

He is a member of Guildhall Art Gallery, Oxford Entrepreneurs Network, Academy Ambassador (New Schools Network) and the Worshipful Company of World Traders.

Ehsan’s analysis and articles for the higher education have been quoted in major publications including The Financial Times, The Wall Street Journal, The Independent, Gulf News, The National, Bloomberg, Thomson Reuters, Intelligent SME, Business Year Book, Gulf Business, MEED, Pipeline and Shanghai Business Review. He has also appeared in a range of media channels including the BBC.