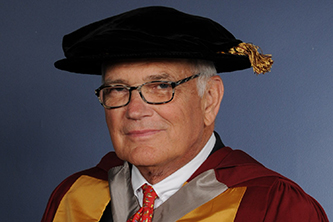 Robert D. Somerville was given an Award of Doctor of Science honoris causa by City in 2013.

Robert D. Somerville has been given an Award of Doctor of Science honoris causa in recognition of his exceptional contribution to the shipping and offshore industries.

Dr Somerville is the former Chairman of the global ship classification society, the American Bureau of Shipping (ABS). His distinguished service at ABS spanned 43 years and included 20 years as either President of Chairman, the longest ever period of leadership in the organisation's 151-year history.

During Dr Somerville's 20 years of leadership, the society's fleet more than doubled in size. Its staff also increased twofold to more than 5,000 employees across 70 countries, establishing it as the second largest ship classification society in the world. 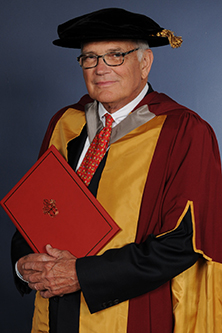 A strong proponent of high shipping and offshore safety standards, Dr Somerville's legacy is felt not only at ABS but also at the International Association of Classification Societies (IACS).Robert was educated at the Maine Maritime Academy, graduating in 1965 with a bachelor's degree in marine engineering. After graduating, he went to sea as an engineer with Texaco. He later gained shipyard experience at Newport News, at the time the largest shipbuilder in the world. He joined ABS in 1970 and held positions including principal surveyor and regional manager for Western Europe before becoming President and COO and then Chairman and CEO. Dr Somerville retired in April 2013.

Dr Somerville is an active member of many professional associations and has received numerous awards in recognition of his contribution to maritime safety. He was inducted into the prestigious International Maritime Hall of Fame at the United Nations in 2006, and in 2007 the US Chamber of Shipping of America awarded him the Admiral Halert C. Shepheard Award. In 2009, he received both the Society of Naval Architects & Marine Engineers Vice Admiral Land Medal and the Massachusetts Maritime Academy Foundation's Captain Emery Rice Medal. In 2013, the US Coast Guard presented him its Distinguished Service Award.

Dr Somerville serves on the board of the Keppel Corporation, GasLogs Ltd, Maine Maritime Academy and the Seaman's Church Institute. He has also served as the Vice Chairman and Chairman of IACS.