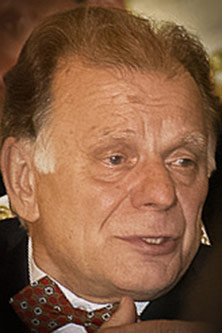 Professor Zhores Ivanovich Alferov has been awarded an honorary doctorate in recognition of his contribution to science and technology.

Born in Vibetsk, Belorussia, USSR (now Belarus) in March 1930 Academician of the Russian Academy of Sciences (RAS) Professor Zhores Alferov is undoubtedly one of the most distinguished and globally recognized physicists of the last 50 years.

Inspired by his high school physics teacher he took an early interest in science and went to the celebrated Ul'yanov Electrotechnical Institute in Leningrad (LETI) where he graduated in 1952. He then joined the prestigious Ioffe Physico-Technical Institute of the USSR Academy of Sciences (now RAS) in St Petersburg where he built his career as a scientist and researcher. From this institute he subsequently received his PhD and DSc degrees in 1961 and 1970 respectively for his work on semiconductor heterostructures.

Professor Alferov was elected Academician of the USSR Academy of Sciences in 1979. He shared the 2000 Nobel Prize in Physics "for developing semiconductor heterostructures used in high-speed- and opto-electronics". The work essentially underpins modern telecommunication, especially fibre-optic communication systems. Professor Aferov authored four books, more than 500 scientific papers and 50 inventions in semiconductor technology. He received many prestigious awards and honorary degrees from over 25 universities and institutes around the world. Eponymous asteroid is named after him.

Professor Alferov is a Vice-President of the RAS, Chairman of the St Petersburg Scientific Centre of the RAS and since 1998, Dean of Physico-Technical Faculty at St Petersburg State Polytechnic University (one of City University London's strategic partners). Since 1995 he has been a member (Deputy) of the Russian State Duma (lower house of the Federal Assembly of Russia) and a member of the Presidential Board for Science, Technology and Education.

Professor Alferov is one of the most prominent organizers of academic science in Russia and a proponent of creation of educational centres at leading institutes of the RAS. The Educational centre for physics and engineering organized by him at the Ioffe Institute has been functioning since 1999, since 2004 - as an independent institution affiliated to the RAS, and since 2009 - as St Petersburg Academic University, a Nanotechnology Research and Education Centre of the RAS. In 2000 he set up Alferov Foundation which promotes education and science and supports students and young scientists.

Professor Alferov is an ardent promoter of the role of science, technology and research in the improvement of social welfare, enrichment of cultural heritage of countries and the solution of problems faced by humanity today. He believes that the framework for this process is broad and affordable education. This is what makes his contribution in promoting science and education so considerable.