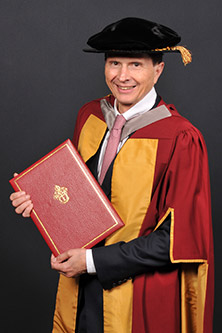 Professor David Heymann, CBE, was given an Award of Doctor of Science honoris causa by City in 2011.

Professor David Heymann is the Chairman of the Public Health England Advisory Board, the Chair of the Health Protection Agency, Head and Senior Fellow of the Centre on Global Health Security at Chatham House, London and Professor of Infectious Disease Epidemiology at the London School of Hygiene and Tropical Medicine.

Professor Heymann has worked in the area of public health for the past 35 years, 25 of which were on various assignments from the US Centers for Disease Control and Prevention (CDC) and 10 of which were for the World Health Organization (WHO). Before joining WHO, Professor Heymann worked for 13 years as a medical epidemiologist in sub-Saharan Africa (Cameroon, Cote d'Ivoire, Malawi and the Democratic Republic of Congo - formerly Zaire). From 1995 to 1998 he was the Director of the WHO Programme on Emerging and other Communicable Diseases and prior to taking up that post, he was the Chief of Research Activities in the WHO Global Programme on AIDS. From 1998 to 2003 he was the Executive Director of the WHO Communicable Diseases Cluster which included WHO's programmes on infectious and tropical diseases and from which the public health response to SARS was mounted in 2003. Most recently he was the WHO's Assistant Director-General for Health Security and Environment and the representative of the Director-General for polio eradication.

Professor Heymann has a bachelor's degree from Pennsylvania State University, an M.D. from Wake Forest University, a Diploma in Tropical Medicine and Hygiene from the London School of Hygiene and Tropical Medicine and practical epidemiology training in the two year Epidemic Intelligence Service (EIS) of CDC. He is a member of the Institute of Medicine of the United States National Academies and the Academy of Medical Science and was given the Award for Excellence from the American Public Health Association in 2004, the Donald Mackay Award from the American Society for Tropical Medicine and Hygiene in 2005 and the Heinz Award on the Human Condition in 2007. In 2009 he was appointed an honorary Commander of the Most Excellent Order of the British Empire (CBE) for services for global public health.