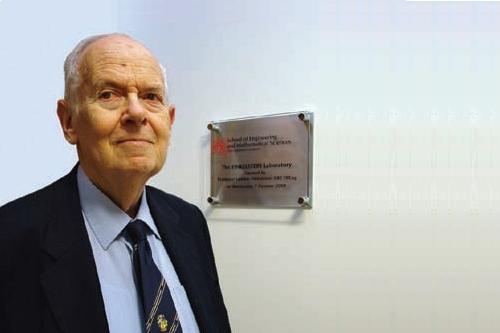 Professor Ludwik Finkelstein, OBE, was given an Award of Doctor of Civil Law honoris causa by City in 1999.

Professor Finkelstein was one of the longest-serving members of City's academic staff. He served as Pro-Vice-Chancellor when City gained its Charter in 1966, having established the Measurement and Instrumentation Centre at City's predecessor - the Northampton College of Advanced Technology.

Professor Finkelstein held honours from a variety of industry bodies, and was awarded an MBE in 1990. He was a Fellow of the Royal Academy of Engineering (FREng), and was given awards by the International Measurement Confederation, The Institute of Measurement and Control, and the Worshipful Company of Scientific Instrument Makers.

His two sons also had close links to City - Daniel is an alumnus and honorary graduate. Professor Ludwik Finkelstein retired from full-time work in 1993, but maintained strong ties with City until his death in August 2011.