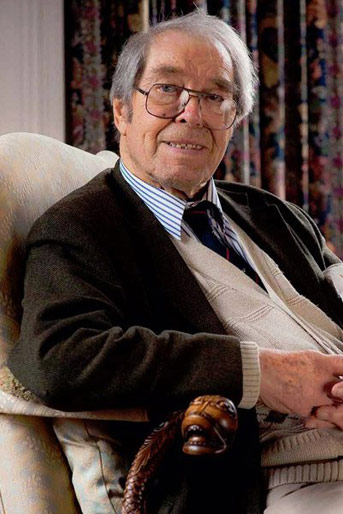 Dr George Daniels, CBE, was given an Award of Doctor of Science honoris causa by City in 2007.

George Daniels, 19 August 1926 - 21 October 2011, was considered by many to be a true genius and certainly the greatest horologist of his time. In a distinguished career spanning six decades, he is most famous for his invention of the co-axial escapement, adopted by Omega for use in their premium watches in 1999. Daniels took evening classes in horology at City, then the Northampton Institute, and believed that his time as a student directly impacted upon his outstanding success as a horologist.

Daniels' interest in watches bloomed at an early age and he began to repair timepieces for friends while serving in the British Army, which he joined in 1944. He made every one of his watches entirely by hand and without assistance. What's more, he was the first watchmaker to master 32 of the 34 skills and techniques required to create a watch alone and by hand. Daniels created only 37 watches during the course of his life; now two watches are the same and for this reason each is considered a work of art. In 2012 a number of pieces from Daniels' own collection, including pieces made by him, were sold at auction for over £8 million. The 'Space Traveller's Watch, made to commemorate the moon landing, was the most expensive item sold at £1,329,250 - the record for an English watch and for an independent watchmaker.

Daniels received a large number of honours: an MBE followed by a CBE (2010); awards from the Clockmakers' Company, London, including the rarely bestowed Gold Medal; from the British Horological Institute; the City of London and the Stockholm Watchmakers' Guild.