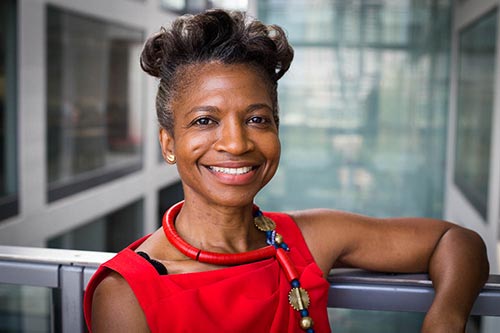 A pioneer of cultural change and leadership development

Studying for the MA in Arts Administration at that early and critical stage in my career was a boom.  It increased my employability and long-term career prospects. Within a year of graduating, I was appointed as  a performing arts specialist for South East Arts. It was a privilege to study with eminent academics and leaders such as Emeritus Professor of Arts Policy & Management, City, University of London, John Pick and the late Tony Fields CBE.  I would strongly commend, anyone embarking on a career in the creative sector to make the investment."

Maureen helped put contemporary dance and cultural diversity on the arts map in south east of England back in the mid-90s while working for South East Arts (now Arts Council South East).  As director of strategic development for Talent & Skills 2000 a Pan-London creative industries millennium project, Maureen was instrumental in the design and delivery of Creative Learning Programmes for unemployed young people. In recognition of her achievements in arts and cultural sector, Maureen was one of the women awarded 'Women of the Year' in 2000 at the Millennium Festival of Women's Work'. She was also awarded the 'European Federation of Black Women Business Owners' Professional Award'. Maureen was a finalist in the Arts and Media category of the 'European Union Women of Achievement Award 2001'.

In 2001, Maureen was commissioned by the USA-based National Black MBA Association to help establish UK operations, leading to the creation of the Black MBA Association UK (BMBAA). It was established to increase the number of black, Asian and minority ethnic business professionals and entrepreneurs as leaders. To this end she brokered strategic alliances with the UK and EU governments, business schools and global businesses. These relationships resulted in a significant investment in innovative programmes for professionals, entrepreneurs and businesses.

In 2008, Maureen launched Freshwaters Consultancy specialising in leadership, strategic and orangisational development to help individuals, and organisations from across different industry sectors, globally.

As Consultant and Programme Partner with the Cultural Leadership Programme (2008-2011), a government investment in excellence in leadership in UK cultural and creative industries, Maureen worked on Peach Work-based Leadership Programme and the Powerbrokers International Leadership Programme.  She has brokered alliances and secured numerous work-based leadership development placementsboth in the UK and abroad at prestigious cultural institutions such as the National Portrait Gallery,  Tate, Jazz at Lincoln Centre, New York, the National Library of Jamaica, the Hong Kong Academy for Performing Arts, the NationalMuseum of Singapore, Beijing Modern Dance Company, Centro Cultural Banco do Brasil and Centro Cultural Sao Paulo Brazil, Sanskriti Foundation and SEHER, India, Biennial of Contemporary African Art Dakar, Senegal. Maureen shares her experience and helps develop future leaders through coaching, mentoring and teaching. She is an Associate Lecturer, University of the Arts, London College of Communication, a Visiting Lecturer at Errol Barrow Centre for Creative Imagination, University of the West Indies and at the International Schools of Management, Senegal.  She lectures on arts management, leadership and entrepreneurship.

Find out where a Culture & Creative Industries course at City could take you.