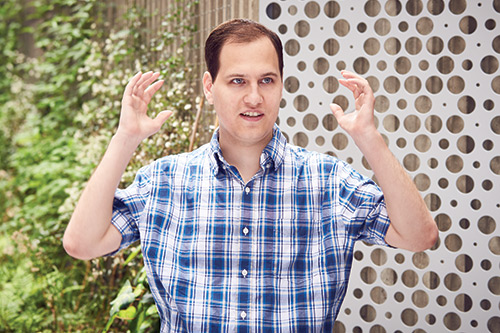 Jordan Tewell envisages a future where your sense of touch helps  to guide you and gets you to your destination faster; where your text messages and emails are enhanced with warmth or chill, helping to augment the emotion you feel.

Jordan, whose background is in computer science, originally envisaged tapping into our less-used senses to improve the experience of computer gamers. But, after completing a Masters in Entertainment Technology at Carnegie Mellon University in 2012 and subsequently working on several startup projects in London, he realised that it wasn’t just gamers who could benefit. Arriving at City, University of London in 2013, he set to work on understanding how temperature affects our emotions.

No matter how many ‘emojis’ we use, it is still easy to misinterpret meaning in emails and text messages. But what about if the words were accompanied by warmth or chill too? “In theory, temperature can add more information and increase the bandwidth of the message,” explains Jordan. With this in mind he devised an experiment where users wore thermal stimulators on their arm (capable of producing warm, neutral and cool temperatures) and reported their emotions as they read a ‘thermally augmented’ Facebook post. Users consistently reported enhanced arousal when text was accompanied by warmth. He says:

We think that this could be really useful for people with cognitive impairments, such as autism, assisting them in understanding the message better.

Meanwhile, temperature might also improve our sense of direction. Wearing the same thermal stimulator, Jordan measured how well volunteers were able to find their way around a two-dimensional maze. “It is a bit like the version of hide and seek where you use hot and cold to let people know how close they are,” he says. With the help of thermal stimulation, Jordan found that people were able to navigate their way around the maze 30 per cent faster. If that’s the case then a temperature bracelet to confirm you are on the right track could significantly reduce the amount of times you shout at your SatNav. And for tourists, temperature stimulators could lead you on a serendipitous tour of hidden attractions.

Jordan presented both his navigation and temperature-enhanced text research at the May 2017 Computer-Human Interaction Conference in Colorado. A month previously he took up an EPSRC Fellowship at City, University of London, bringing his skills to the SCAMPI (Self-Care Advice, Monitoring, Planning and Intervention) Research Project, developing new types of sensors to aid people with chronic conditions to continue living in their own home.

Whether we’ve lost the ability to use some of our senses, or we’ve forgotten how to tune into them, Jordan Tewell aims to bring the full sensory experience back into our lives.

To find out more, visit: www.jordantewell.com

Jordan Tewell (a PhD student in City’s Centre for Human-Computer Interaction Design) tells Kate Ravilious he thinks it’s about time we made more use of our senses other than sight and hearing,