Energy and Environmental Technology and Economics 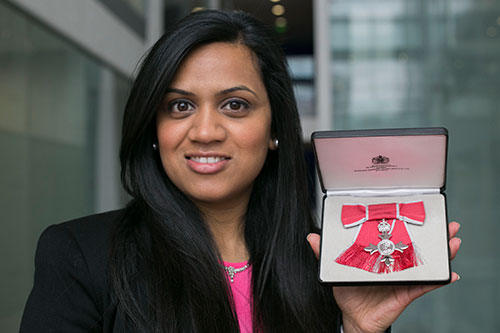 WeWork is changing the way people and companies work. From a third of the Fortune 500 to grassroot non-profits, its members are empowering employees, fueling innovation and uplifting communities.

Jaz discovered her passion for energy whilst studying on the BEng Mechanical Engineering degree at City, University of London. She saw how engineering could be applied to make buildings, organisations and processes more energy-efficient and decided to undertake the part-time MSc in Energy and Environmental Technology and Economics at City whilst working as an Energy Manager at Sainsbury's.

After completing my undergraduate degree at City, I was certain it was the right place for me to continue on as a postgraduate. City's facilities are top of the range and, with City being located in the heart of London, it allowed me to combine working and studying. I was able to find a job in industry straight after my degree and received fantastic support from City staff in presenting me with opportunities.

During her Master’s degree, Jaz took advantage of every opportunity City offered, was able to strengthen her career with new-found knowledge and gained a good understanding of what further challenges she may face in her career.

The course was great as it gave me access to industry experts and helped me understand how energy management could be applied in the workplace. I loved the diverse mix of students in my lectures as it helped to build a global picture of the energy challenges we are facing. I really enjoyed the high calibre speakers and in depth debates we had during seminars. Energy presents social, political and economic challenges on a global scale and it was brilliant to deep dive into these.

Having previously held energy roles at Starbucks, Debenhams and Sainsbury’s, Jaz is now the Energy and Sustainability Director at WeWork. She was the youngest person in the UK to be awarded chartered energy manager status by the Energy Institute. In 2015, she was elected onto their Board of Trustees. Jaz also volunteers as a STEM Ambassador, reaching out to schools and college to promote the engineering and energy sector as a career path.

WeWork is a massive global brand, and as a growing business has the potential to make a real positive impact on the environments and countries in which it operates. I hope by sharing my career story I can show how varied energy careers can be. I’ve worked for some incredible brands and have had the opportunity to significantly reduce environmental impact in these roles.

Jaz was also recognised in the Queen's 2016 New Year Honours and was awarded an MBE in recognition of her contribution to sustainability in the energy management sector and diversity in the STEM sectors.

I was very humbled to have been recognised in the New Year Honours list. My initial reaction was disbelief that I had even been nominated, it’s so wonderful for my service to the energy and sustainability industry to recognized in this way.

Since graduating, Jaz has had a successful career in energy across various industries. Having joined the Energy Institute after a lecturer recommended it, she was named as their Young Energy Professional of the Year.

I've had many highlights working in the energy sector. I am indebted to the support City, University of London has provided me and as a small token of appreciation, I often come back to lecture on energy courses and take part in career events.

Find out where Engineering at City could take you.