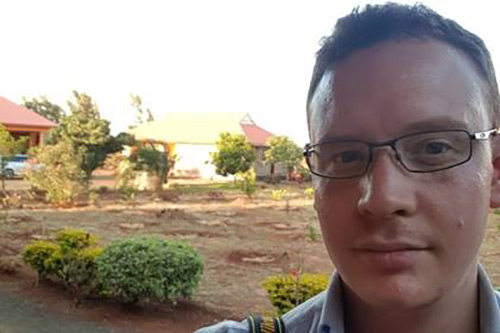 Your experience at City

How did you develop an interest in Radiography, and why did you choose to study at City, University of London?

I’d previously studied photography, and was far better at the technical side than the artistic side! From that I was looking for something a little more practical that I could do, and I found out about radiography. I looked further into it, and became more and more interested, and then had a session following some radiography staff at my local hospital. From there I looked around for sites to study at, and City had the London location and very impressive facilities that made it my first choice.

What did you enjoy most about your time at City?

City, University of London had a great level of support from the lecturers both in person and through online systems, and a great amount of knowledge throughout the team. There was a great culture of encouragement towards the students, and the lecturers were clearly passionate about their own areas of speciality, with some really complicated areas (MRI physics!) explained clearly and simply.

What would be your advice to anyone considering studying BSc (Hons) Radiography (Diagnostic Imaging)?

Get a clinical visit with radiography staff at your local hospitals, and take as many notes as you can throughout the course. Keep a positive attitude on clinical placement, find the areas that interest you and get into them!

Your career since graduating

Can you tell us where you’ve worked since graduating from City, what roles you’ve had, and what you’ve enjoyed most about your career so far?

I’ve worked at 4 trusts, including 2 major trauma centres (Kings College Hospital and Leeds General Infirmary). I started at some smaller District General hospitals (Kettering and Torbay), which gave me a good grounding of clinical practice post qualifying (having had a great deal of experience on clinical placement at City!). I also got some CT experience and developed an interest in Theatres and interventional imaging. While at Torbay I also became involved with EGHO’s Kenya Orthopaedic Project, through which I’ve had the opportunity to work in both Nanyuki and Marsabit. These projects are a fantastic experience, and really do a lot of good in the areas they run. One of the big aspects of them is training the local teams up and sharing knowledge and skills in both directions.

I then moved to Kings (and later Leeds teaching Hospitals), which gave me a lot of experience in major trauma and working in larger sites. At Leeds I got involved in the NIHR/HEE Clinical research Internship, where I performed a study for reducing radiation dose by using low kV in CTPA. I love CT, especially neuro and trauma, and have also taken some shifts at a private site doing vascular imaging in their catheter labs. Recently I’ve moved to working for an Imaging software and equipment company (Agfa), as many of these firms are looking for clinical staff.

How did your time at City help prepare you for your career?

City sent us to several clinical sites across the 3 years, which gave me a wide experience of clinical practice in a variety of scenarios. They also emphasised CT in the 3rd year (which is a good skill for any qualifying radiographer to have!), and all the lecturers were hugely supportive whenever any of us had any problems.

Can you tell us a bit about your current role, and what happens in a typical working week?

In a typical week as a radiographer I would be working with several different specialist groups needing CT, including the cardiac specialists for the CT coronary angiography lists, the paediatric nurses, Operating Department Practitioners and anaesthetists for the General Anaesthetic lists, and often some of the interventional or Musculoskeletal radiologists for image-guided interventions in CT. These in particular have expanded with developments in the oncology services (so that now tumor ablation is performed as well as joint and nerve root injections). I’ll also be scanning major trauma patients as they come in and liaising with the multidisciplinary teams in resus, and the stroke specialist nurses who have a direct line to CT for patients who have suffered a stroke and may need time-limited interventions to save as much brain as possible.

On top of this, there’s also the in and out-patient lists to scan and coordinate across all the scanners, and often I might give other radiographers a hand (or ask for one!) when lists get busy. As much as we try and plan, it’s always a dynamic environment in CT and we have to be able to deal with unexpected events and delays while minimising the effect on our work. An emergency patient coming from angiography labs who may have a dissected aorta needs to get scanned immediately, and it’s often a job of prioritising who gets scanned next while ensuring nothing important gets missed and no-one is waiting too long. Occasionally, I also try and teach some students!

I found theatres work really interesting as a student, as it was such a different environment from working in department. The teamwork and complexity of it all seemed really intimidating though, and when I qualified I thought I’d try and write up some notes for my own reference, in order to get a better idea of what is needed and how best to work. After I kept making notes for a while I had the idea of putting them together into a format that might be useful for students at my site  and eventually I thought I could make it a more general guide for students and newly qualified radiographers, and then the book grew out of that!

I wanted to make the text as widely applicable as possible, so I decided to cover the most common procedures in detail while covering some more general rules and techniques. Hopefully this will give the reader a good background as to how and why tasks are performed in certain ways , and this will allow them to image confidently during procedures that aren’t covered!

What are your hopes and goals for the future?

I’m out of clinical work at present, so would like to see where my new position takes me! I’ve also looked into getting into lecturing, and might return to clinical practice and research.