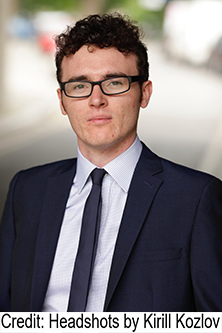 I enjoyed the level of creativity it offered on my course, I was able to write stories and investigate any topics I wanted to.

What do you do now and what do you enjoy about it?

I’m a producer at BBC Politics. I work across programmes including Politics Live, Westminster Hour, BBC Parliament and PM. My responsibilities include booking guests, writing briefs for presenters, producing films and occasionally reporting. I love having a window onto the levers of power and the best thing about the BBC is that you’re encouraged to learn all the skills you need to operate in TV, radio, online and social.

Why did you choose to study at City and how has it helped you?

I decided I wanted to be a journalist when I was 14 and set my sights on going to City not long after that. A quick google shows you it’s the best-regarded journalism school in the country and that reputation totally stands up when you’re looking for jobs. Whatever newsroom you walk into, you’re almost guaranteed to meet some fellow alumni.

What did you enjoy the most about your course?

Doing the BA means you get to learn about all different types of journalism. I took courses in sports journalism, financial journalism, data, TV, radio, online and print. And you increasingly need lots of those skills if you want to get on in a newsroom. The other part of the course I enjoyed most was getting the chance to do my work experience year. I set up loads of placements, lots of them through contacts I’d gained at City’s networking events and two – the Express and Sky News – led to jobs.

What was the hardest thing about your course?

Finding good interviewees. Every journo wants to get that killer quote from an interesting person. But interesting people don’t always want to spend their time helping out students. You’ll spend half your time trying to convince people to give up an hour of their lives for you. And when you finally get someone good and they give you that line, the feeling is unbeatable.

Being in the heart of London is absolutely what makes City, City. It’s a very different university experience to being in a campus bubble and everyone has moments when they’re jealous of their friends at other universities who seem to be having an easier life. But in the end nothing beats living and studying in the most exciting, interesting city in the world.

What advice would you give to current and future City journalism students?

Use your lecturers’ contacts – it’s a very small industry and they all know lots of people. That means going to as many of the networking events as possible. At first they’ll be horribly awkward but eventually you’ll learn how to make small talk with potential employers.

Get as much work experience as possible in lots of areas of journalism. A first-class degree won’t help you get a job if you’ve never stepped foot in a newsroom. And like with the networking, work experience is tough at first. I was rubbish during my first few placements, but practice is the key.

Consume loads and loads of journalism. Listen to the radio, subscribe to podcasts, watch TV news and documentaries, read newspapers and magazines, visit websites, and follow the right social media accounts. You don’t want to be the person that has to admit in an interview they never buy a paper.