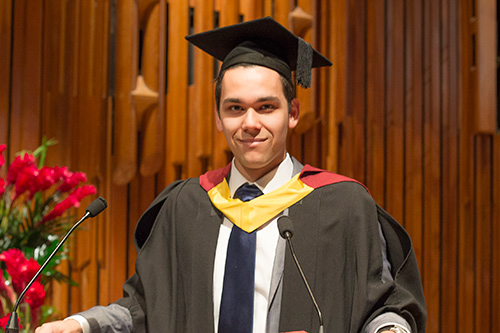 Having secured a training contract with a law firm, Alex chose the GDL at City to convert his non-law degree into a law degree.

Why did you choose to study the GDL?

I previously studied a BA Politics and East European Studies, and I wanted to do Law as a career, and the GDL is the course needed to convert my non-Law BA into a Law degree. I had also secured a Training Contract with a law firm, so I needed to convert as soon as possible.

Why did you choose City, University of London?

City, University of London has a reputation in the field for a demanding GDL which pushed students beyond their competitors. Practitioners I’d talked to had all recommended City as more rigorous and giving a more thorough legal education than other providers, and as I had the choice,  I chose The City Law School.

What are you doing now?

What advice or tips would you give to anyone who wants to study on the GDL?

Do the work as it comes, and make sure you don’t fall behind. Being organised is the key.

Don’t panic. It will seem as if you have a lot of reading and work to do, but it will all come together at the end. Keep your head down, do the work week by week, and you’ll be pleasantly surprised when it comes to revision time.