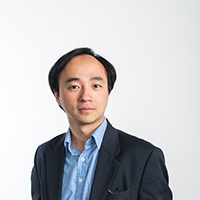 Professor Yang-Hui He is a mathematical physicist working on the interface between geometry, number theory and quantum field theory/string theory.
Recently, he helped introduce machine-learning into the field of pure mathematics by using AI to help uncover new patterns and raise new conjectures (cf. interview by Science [Vol 365, July, 2019] and by New Scientist [Dec 9 Issue, 2019]).

Yang joined City in 2010 as Reader. He is currently Professor of Mathematics and Senior Tutor for Research for Mathematics. He concurrently holds the Chang-Jiang Chair Professorship at NanKai University, China and jointly remains a Tutor and Lecturer at Merton College, Oxford where he taught since 2005.

Yang is a mathematical physicist working on various interfaces between geometry and theoretical high energy physics. He is particularly interested in aspects of algebraic geometry in application to, and interacting with, gauge theory as well as string theory, such as Calabi-Yau manifolds, holographic correspondences and string phenomenology. He also has interests in the dialogue between number theory, graph representation theory and gauge theories.