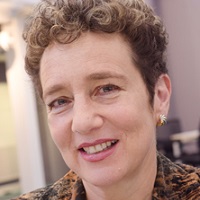 Professor Suzanne Franks was head of the department of Journalism from 2016-19 and in 2020 she returns from research leave.

She read PPE at Oxford and spent a year as a Kennedy Scholar in the Government Department at Harvard University. She worked briefly in Washington DC for a public interest group before taking up a traineeship at the BBC. She joined the Television Current Affairs department, producing programmes such as Newsnight, Watchdog, The Money Programme and Panorama. As a Senior Producer she edited election programmes, budget coverage and live special programmes such as the party conferences. She was also awarded a Nuffield Fellowship to study the development of satellite television in India.

In the 1990s she left the BBC to start an independent production company, Sevenday Productions, which amongst other things was awarded the first outside contract for the televising of Parliament. She was based in Westminster, responsible for all the coverage from the Lords, Commons and committees until 2001. The company also developed a web business specialising in political coverage and was awarded the first webcasting contract from Downing Street. The business was sold in 2004 and Suzanne moved to the University of Westminster to join the BBC history project working on volume 6 (1974-87). As part of the project she completed a PhD in 2007 on foreign reporting, 'Famine, Politics Aid and the Media.'

In 2008 she took up an appointment at the University of Kent - she was Director of Research in the newly established Centre for Journalism and also a Senior Lecturer in Political Communication in the School of Politics and International Relations.

Professor Franks was appointed to a chair in Journalism at City University London in 2012 and until 2016 she was director of the undergraduate programme. She also supervises PhD students and contributes to the research output in Journalism. She is currently participating in an EU Horizon 2020 consortium on improving the reporting of science and she leads an impact case study on female expertise in news broadcasting.
In August 2016 she was appointed to head the City Journalism Department. In 2014 she was an Erasmus visiting scholar in the Journalism School, University of California, Berkeley and in 2015 she was a visiting fellow at the Reuter's Institute for the Study of Journalism, University of Oxford.
Suzanne has published widely in books and articles, on topics including gender, the history of the media and reporting international news.

- Also an occasional blogger including for NiemanLab, The New Statesman, BBC Academy, The Conversation.

Thesis title: Obscenity versus objectification: a study of the impact and significance of the Leveson inquiry and report on the visual representation of women in UK print media