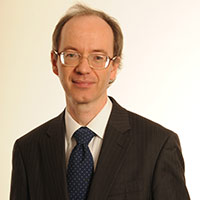 Stuart originally joined The City Law School (formerly the Inns of Court School of Law) in 1987. He teaches civil litigation, ADR, advocacy, drafting, opinion writing, company law and commercial law. He also designs and delivers CPD courses on civil litigation, evidence and procedure for solicitors. Since January 2006 he has been Course Director for what is now the Bar Professional Training Course.

Stuart was called to the Bar in 1983. He spent 3 years working in the Treasury Solicitors' Office in both the Bona Vacantia and the Litigation departments. In 1987 he joined the Inns of Court School of Law as a lecturer. Between 1994 and 2005 he was a tenant in the chambers of Evan Ashfield, with an entirely civil and commercial practice. He was appointed a Professor of Law in 2011.

Stuart Sime is an editor and author for Blackstone`s Civil Practice (OUP). He is also the author of A Practical Approach to Civil Procedure OUP, 14th ed. 2011 and Blackstone`s Guide to the Civil Procedure Rules and a co-author of A Practical Approach to ADR (OUP). He is the editor for The City Law School's manual on Company Law, and has contributed to the manuals on civil litigation, company law, advocacy, case preparation, opinion writing and evidence.