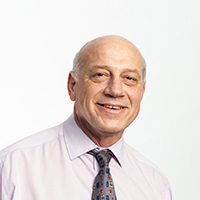 His research experience is in the areas of Control Systems Design, Algebraic Control Synthesis Methods, and Sampled and Discrete Time Systems. He has contributed in the development of a methodology for Synthesis of Discrete Time Control schemes based on the problem of "Finite Settling Time Stabilisation" (FSTS) and the development of control based methodology for Control Structure Selection. His main research interests are in Discrete Time Control, Modelling and Simulation of Dynamical Systems, Systems Theory and Graph Methods for Multivariable Control Systems.