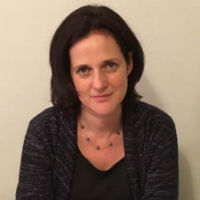 Sarah is a Research Fellow based at the Division of Language and Communication Science. She worked as a Speech and Language Therapist on the Isle of Wight and for Lambeth Primary Care Trust before completing a PhD examining the social impact of stroke and aphasia. Since her PhD she has led two small-scale projects. The first was a proof-of-concept study exploring Solution Focused Brief Therapy with people who have post-stroke aphasia; the second analysed Speech and Language Therapists’ experiences in addressing the psychosocial needs of people who have had a stroke. In 2015 she was awarded a City University 12 month Postdoctoral Fellowship Award. More recently, she has received the Stroke Association Jack and Averil (Mansfield) Bradley Fellowship Award for Stroke Research.

Sarah’s first degree was in Music at Cambridge University, and she went on to study piano accompaniment at the Royal Academy of Music in London. She subsequently retrained to become a Speech and Language Therapist at City University London in 2002. While working at Lambeth Primary Care Trust as a clinician she became increasingly aware of the social and psychological impact of stroke and aphasia. Her research interests lie in exploring ways to support the emotional and social well-being of people post stroke.

Member of the scientific committee for the British Aphasiology Society Therapy Symposium, 2012; and for International Aphasia Rehabilitation Conference, 2016

Sarah’s research focuses on improving psychosocial well-being for people with stroke and aphasia. There are two broad strands to her research.

Firstly, she is interested in research that explores ways to enable people with aphasia to make meaningful and positive change in their lives. She has a particular interest in Solution Focused Brief Therapy, and has recently received the Stroke Association Jack and Averil (Mansfield) Bradley Fellowship Award to enable her to conduct a feasibility study (the SoFIA trial). This study will explore how best to adapt this therapy approach for people with both mild and severe aphasia; the acceptability and perceived benefits; as well as examine the feasibility of carrying out a future large-scale trial into clinical and cost effectiveness.

Secondly, Sarah is interested in exploring the psychosocial impact of stroke, both the ‘lived experience’ of having a stroke using qualitative methodology, and also adapting and developing outcome measures that are accessible to people with aphasia. For example, as part of her PhD, she developed the Stroke Social Network Scale which enables both those with and without aphasia to self-report on their social network, enabling clinicians to identify those at risk of becoming socially isolated.