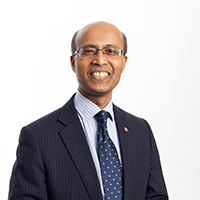 Professor of Instrumentation and Sensors

Professor Khan graduated and received his MSc degree (first degree) with Distinction in electromechanical engineering in 1983 (1976-1983, including one-year language course) from Peter the Great St Petersburg Polytechnic University (SPPU), St Petersburg, Russia. He received his PhD degree in electrical engineering from SPPU in 1988. He has been with the School of Mathematics, Computer Science and Engineering since 1989 where he is currently a Professor.

Professor Khan is an Honorary Professor of SPPU, a Fellow of The Institution of Engineering and Technology (IET), the Institute of Measurement and Control (InstMC), a member of the IEEE, IEEE Magnetics, Engineering in Medicine and Biology, and Instrumentation and Measurement societies. He has been a Vice-President (Membership) of InstMC (2008-2011). He is also a Founder Member of the International Compumag Society (ICS) and a member of the Journal Editorial Committee of Measurement and Control. Professor Khan is the Editor-in-Chief of the journal Sensor Review. He has been an Associate Editor (2006-2017) of the journal Measurement, and the International Journal on Measurement Technologies and Instrumentation Engineering (2010-2019). He is also a Liveryman of the Worshipful Company of Scientific Instrument Makers, a past member of its Education Committee, an Apprentice Master of the Livery, a member of the Court, and a Freeman of the City of London.

He has published many papers in journals, conferences, and in books.