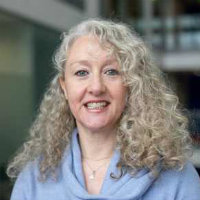 Sally Webb is Director of Broadcasting and head of the MA Broadcast Journalism and MA Television Journalism courses. She also teaches on MA International Journalism, and has previously taught on the MA Investigative, MA Financial and MA Science Journalism courses, and for Erasmus Mundus.

Sally is an acclaimed journalist and television producer/director, and her work has been screened worldwide. She began her career at BBC North West, working in local radio (Greater Manchester Radio), in the regional TV newsroom (North West Tonight), for the political programme (Northwestminster), and for the documentary series (Close Up North). She moved to the BBC Political Research Unit in London, before joining the BBC Special Documentaries Unit to make special investigative programmes for Panorama, Assignment, and File on 4, the multi-award-winning documentary series on Radio 4. Sally helped create the BBC 1 current affairs programme "Here and Now", before being headhunted by the independent production company Twenty Twenty Television. There she made documentaries for national and international channels (including CNN), and helped create the current affairs programme "What's the Story?" for Channel 5, as well as producing/directing packages for Channel 5 News. She later moved to Granada to help create and produce/direct the multi-award-winning current affairs programme "Tonight with Trevor McDonald" for ITV.

Sally trained BBC staff for over fourteen years, running the Single Camera Directing course and Self-shooting course for the BBC Academy. In 2006 she became a regular contributor to the BBC College of Journalism website, and over six years made many best practice films including Embedded journalism: Reporting conflict and Investigative reporting techniques: Paul Kenyon. Sally also worked as a visiting tutor in Directing at the National Film and Television School for sixteen years.

Sally is a Fellow of the Higher Education Academy, a member of the Royal Television Society, and a member of Women in Journalism.