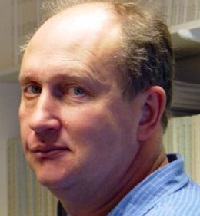 Since 2001 he has used the pupil response of mice to monitor visual function in transgenic animals. Using this technique he has, in collaboration with colleagues in Oxford, Cardiff and Manchester, helped characterise a novel photoreceptor class in the mammalian retina, elucidated visual function in retinal mitochondrial disease and been involved with developing the use of retinal rod precursor cells to reverse retinal degeneration. Although not mammals, he has also examined the pupil responses of fish, cephalopods and frogs.

At school Ron's only talent was as a swimmer. By diverse routes this indirectly led to an interest in the way the eyes of various vertebrates, especially fish, have adapted to suit their environments. A particular interest has been the eyes of deep-sea animals living in the depths of the oceans, which has resulted in his participation in numerous research expeditions throughout the world's oceans. His interests cover; colour vision (especially in the ultraviolet), depth perception, circadian rhythms, lens pigmentation, visual pigments and ocular anatomy. Findings include; the use of chlorophyll to enhance longwave sensitivity in dragonfish, eyes that focus light using mirrors, and a relationship between latitude and the reliance on circadian clocks.