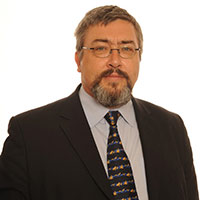 Robert is currently a Principal Lecturer at The City Law School, having joined what was then the Inns of Court School of Law as a lecturer from private practise at the common law Bar in London.

Since becoming a barrister, Robert has been interested in the theories and practice of advocacy and evidence and has been involved both as a student and as a tutor in these areas for many years. Robert took his LLM at University College London in the mid-1980s, where he was among the first group of students to take the 'Evidence and Proof' module developed by Professors William Twining and Ian Dennis. Having been involved in the design and development of the Bar Vocational Course in 1989, Robert has continued to research into advocacy theories and training as well as delivering practical courses in several countries and to different groups of professionals.

Currently, Robert teaches on the Bar Professional Training Course, LLM in Criminal Litigation and LLB as well as doing occasional work for the law school's Continuing Professional Development unit. In his spare time, Robert successfully completed his studies with the Open University for an MSc in Forensic Psychology.

For several years, Robert was a Visiting Professor at the Institute of Law in Jersey, Channel Islands, teaching and examining on the Jersey Law Course. In addition, he played a central part in developing courses in criminal and civil litigation and professional ethics for the Guernsey Advocates' course.

Robert has a particular interest in storytelling, as used by advocates. He is on the organising committee for the international conference series, Applied Legal Storytelling, and presented papers at the 2nd and 3rd conferences, in 2009 and 2011, as well as at other conferences over many years.

Robert edits and contributes to several of the 'Bar Manuals' series published by Oxford University Press, including Advocacy, Professional Ethics and Criminal Litigation & Sentencing. For several years, he wrote the chapter on Evidence for the Annual Review in the All England Law Reports series, published by LexisNexis.