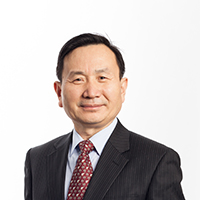 Professor Qingwei Ma obtained BSc and MSc degrees in Engineering from Harbin Engineering University, PR China, in 1982 and 1984, respectively. He received his PhD degree from University College London, UK, in 1998.

He is now also the Director of the Research Centre for Fluid-Structure Interaction, City, University of London.

Professor Ma has been engaged in research on interaction between fluid/water-waves and structures since his study for MSc.

The areas covered by his research includes: