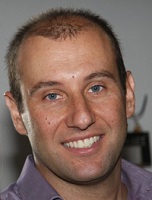 Dr Nikos Komninos received his Ph.D. in 2003 from Lancaster University (UK) in Information Security. He is currently a Senior Lecturer (US System: Associate Professor) in Cyber Security in the Department of Computer Science at City University London. Prior to his current post, he has held teaching and research positions at the University of Cyprus, Carnegie Mellon University in Athens (Athens Information Technology), University of Piraeus, University of Aegean, and University of Lancaster.

Between 2003 and 2007, he was an honorary research fellow of the Department of Communication Systems at the University of Lancaster. He was also a visiting faculty member at the University of Cyprus and a faculty member at Carnegie Mellon University in Athens,, between 2005 and 2013. Part of his research has been patented and used in mobile phones by Telecommunication companies; in crypto-devices by Defense companies; and in healthcare applications by National Health Systems.

Since 2000, he has participated, as a researcher or principal investigator, in a large number of European and National R&D projects in the area of information security, systems and network security. He has authored and co-authored more than 80 journal publications, book chapters and conference proceedings publications in his areas of interest. He has been invited to give talks at conferences and Governmental Departments, as well as to train employees in Greek and UK businesses.