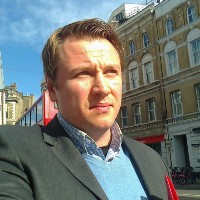 Lucas joined City University in 2014. He works for the School of Health Sciences as a Lecturer in Child Health. Lucas also works part-time at The Royal London Hospital, as a registered nurse. He specialises in surgical, trauma, and orthopaedics care.

Lucas initially worked and studied in Poland at the Nicolaus Copernicus University in Toruń, where his degree was in Physiotherapy. His key interest at Masters level was in Sports Medicine. Later he specialised in Structural Osteopathy and Soft Chiropractic at The Ackermann College of Chiropractic. Throughout the academic years, Lucas was a competitive decathlete, representing his university and athletic club on national stage, and also his country during international competitions.

In 2007, he retired from a professional sports career and moved to England. He became involved in the Mind Charity, where he worked with adolescents with mental health problems. During that time he realised that a career related to child health would be the most rewarding and interesting choice for him. Lucas accepted the position of a Paediatric Healthcare Assistant at The Royal London Hospital, and shortly after he undertook the Postgraduate Diploma in Child Nursing.

Since completion of his nursing course, Lucas works at The Royal London Hospital for a busy multispecialty ward. In August 2014, he also joined City University as a Lecturer in Child Health.

Lucas mostly teaches acute care and moving and handling. His interest is in paediatrics surgery, orthopedics, and trauma. He also has expertise in sports injuries, and teaches the musculoskeletal system in the Advance Nursing Practice module.

Lucas is one of the Admissions Tutors for the Children’s Nursing programmes.