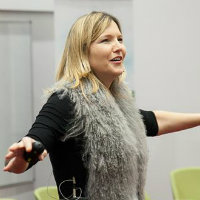 Jutta Tobias Mortlock, PhD, is a social psychologist with over 20 years of work experience in organisational development and capacity-building in six countries on three continents.

Jutta’s research interest is focused on behaviour change initiatives in workplaces geared at generating sustainable wellbeing and performance, using "third wave" cognitive behavioural approaches such as Acceptance and Commitment Therapy (ACT) and other evidence-based mindfulness frameworks. She teaches and advises on workplace mindfulness and leadership and is a popular keynote speaker on the link between wellbeing and performance.

In partnership with her colleague Dr Trudi Edginton, Jutta co-directs City University's Centre for Excellence in Mindfulness Research (mindfulness-science.com), a think tank dedicated to helping shape the next generation of mindfulness research, practice, and policy.

Jutta's work has been published in a number of leading academic journals such as Journal of Business Venturing, Management Accounting Research, Journal of Learning and Instruction, and in the International Journal of Operations and Production Management (in which her work was awarded the 2018 best paper award).

She has won several academic and adult teaching and learning awards (including the 2019 City University School of Arts and Social Sciences Learning & Teaching Award and People's Prize). Jutta has also featured in the popular press, including in The Times, The Sunday Times, The Financial Times, Newsweek, on BBC Radio 4 and the BBC World Service, and in the 2015 TV documentary “The Mindful Revolution”.

In her life before academia, Jutta worked for nearly a decade as a consultant for several IT consultancies including Arthur Andersen, partnering with firms such as Goldman Sachs, Nomura and McKinsey on IT and strategy projects.

During her doctoral studies at Washington State University, Jutta was fortunate to be selected to direct a student-led project creating a sustainable community internet space in rural Rwanda on behalf of USAID. Jutta's doctoral research took her back to Rwanda where she conducted one of the first government-endorsed scientific surveys of post-genocide intergroup relations between Hutu and Tutsi and the effect of institutional reform to increase entrepreneurial opportunity in a desperate poverty post-genocide context.

Jutta learned the art and science of lobbying in the public interest as the post-doctorial James Marshall Public Policy Fellow for the American Psychological Association and the Society for the Study of Social Issues during Washington, DC's "glory days" when President Obama introduced the Health Care Reform bill.

Jutta is a Fellow of the RSA (Royal Society for the encouragement of Arts, Manufactures and Commerce), holds a psychotherapeutic counselling qualification from the University of Cambridge, and has volunteered in US prisons for the Alternatives to Violence Project (AVP), a volunteer-run conflict transformation program. She lives in Surrey with her family and a pushy poodle who moonlights as a PAT (Pets As Therapy) dog.