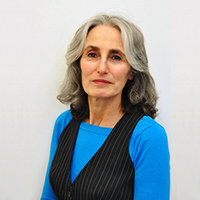 Julia was a full time lecturer in the Centre for HCI Design from January 1999 until December 2008. In 2009, she continued to work for HCID on a part time basis as a researcher, initially on the NHS Connecting for Health, Safer Handover project. Between August 2010 and l May 2012, she worked on the EPSRC GReAT project, a collaboration between the Centre for HCI Design, the Division of Language and Communication Science (City University) and the Stroke Association. In September 2012 she began work on the EVA project, another collaboration between HCID and the Division of Language and Communication Science, this time funded by the Stroke Association. She is currently also contributing HCI expertise to three other aphasia-related projects based in the School of Health Sciences.

Julia has a PhD in Artificial Intelligence from the Open University, an MSc in Cognition, Computing and Psychology from Warwick University, and a BSc Hons in Zoology from Nottingham University. Her research interests include safety-critical user interface design and new technologies, particularly within healthcare. Her background is in cooperative interaction, belief revision and dialogue modelling. Julia was Principal Investigator on the ESRC/EPSRC/DTI funded ACE project and co-investigator on the EPSRC funded GHandI project.