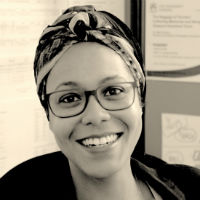 Dr Jenny Mbaye joined City, University of London as a Lecturer in 2015 and was promoted to Senior Lecturer in 2020. She does research in cultural policy and governance, creative economy and labour in relation urban creativity, development and transformation in African contexts. Her work focuses on urban popular cultures, entrepreneurship and the music economy in Francophone West Africa. She joined the Centre for Culture and the Creative Industries (CCCI) in 2015 and currently is the Programme Director of its MA in Culture, Policy and Management. Previously, she was a Postdoctoral Research Fellow at the African Centre for Cities (ACC), University of Cape Town (UCT) and the Recipient of the prestigious Ray Pahl Fellowship in Urban Studies (2013).

Jenny worked in cultural and media organizations in Senegal and Burkina Faso, and as an academic researcher in Canada, the U.K. and South Africa. She is a policy consultant (UNESCO/HABITAT Culture Urban Future; UNDP/UNESCO Creative Economy Report 2013; Praia Declaration; UNESCO Creative Cities Network; Open Society Initiative for West Africa, British Council), a Jury Member for the African Art Lines artistic mobility fund, and a member of the Arterial Network Cultural Policy Task Group for which she acted as scientific advisor on its African Creative Cities Network pilot programme (2016-18).

She holds a PhD in Human Geography (urban cultural economy) from the London School of Economics and Political Science (LSE), 2011; a DESS (Graduate Diploma) in Management of Cultural Organisations from HEC-Montreal, 2006; an MA in International Studies (ethnomusicology) from the University of Montreal, 2005; and a BA in Sociology & Anthropology from Concordia University, 2003.