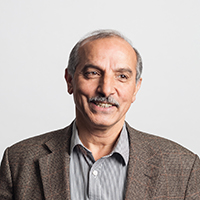 Professor Nouri graduated with a BSc (Hons) degree in Mechanical Engineering from Reading University in 1983. He undertook postgraduate research in Thermofluids Section at Imperial College of Science, Technology and Medicine, London University, leading to the Degree of Doctor of Philosophy in 1987. He joined the same research group at Imperial College in June 1987 as a Research Fellow. He has a wide experience in the field of the experimental fluid mechanics with expertise in optical techniques for flow diagnosis; a refractive index matching (RIM) method was developed allowing measurements by LDV in dense suspension flows and flows in very complex geometries. He carried out research on flow characteristics of multi-phase flows and Newtonian and non-Newtonian fluid flows, but since 1992 he was mainly involved in research on fluid mechanics, internal combustion engines, Gasoline and Diesel fuel spray processes, centrifugal pumps and turbo-chargers.