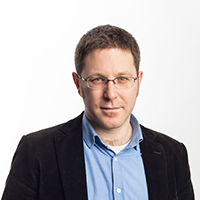 Dr Iasonas F. Triantis was born in Geneva, Switzerland in 1976 and received his basic education in Ioannina, Greece. He received his MEng degree from the department of Electrical Engineering and Electronics, UMIST (now part of Manchester University) in Manchester, UK in 2000. Between 2000 and 2003 he was a Research Assistant in the Electronic and Electrical Engineering (EEE) department at University College London (UCL), where he completed his PhD on implantable neuroprostheses in 2005.

Between 2005 - 2010 he worked as a Research Associate on advanced neural interfaces at the Institute of Biomedical Engineering (IBE) at Imperial College London before returning to UCL to work for two years as a Senior Researcher on microelectronics for electrical impedance tomography (EIT).

He is currently a Lecturer in Instrumentation and Sensors, with the Bioengineering Research Group (BERG) at the department of Electrical and Electronic Engineering, City University London.

He has designed a number of chips for biomedical applications and he has explored multi-modal bio-sensing and bio-actuation techniques, including combining electrical with chemical and optical methods for neural interfacing. He has co-authored more than 40 journal and conference publications, book chapters and patents. He has pursued and attracted funding and developed international collaborations. Further to research, his activities include student and researcher supervision, teaching undergraduate and postgraduate courses and setting up and maintaining electronics laboratories.

Dr Triantis specialises in analogue chip design for bio-interfacing and has undertaken research in the areas of microelectronics mainly for electrical bio-interfacing, and more specifically for implantable neuroprosthetics and impedimetric instrumentation.

Some of Dr Triantis's recent research activities include the design of an Application-Specific Integrated Circuit (ASIC) for neural signal monitoring, which is aimed at assisting the rehabilitation of patients suffering from spinal cord injuries; he has pioneered research into the use of chemical microsensors for neural monitoring and he has also co-developed advanced neural stimulation methods. He has designed integrated circuits for portable Electrical Impedance Tomography (EIT) systems that can be used for imaging neonatal lung functions, and some types of cancerous tumours. His work was specifically focused on the design, development, post-processing and testing of transistor-level microelectronic circuits for sensing and actuation, fabricated on silicon substrates using BiCMOS and CMOS technologies.

At his current post Dr Triantis is conducting interdisciplinary research in analogue electronics for micro-sensors, electrical bio-interfacing and medical diagnostics. The initial stages of his research will focus on designing the first integrated circuits at City University London. The two main applications will be Electrical Impedance Tomography for gastric imaging and Multimodal Neuro-Stimulation. The first is a direct continuation of prior research and the second is a very interesting new idea that builds on the strengths of the Bioengineering Group that he recently joined, as well as on his experience in electrical bio-interfacing.