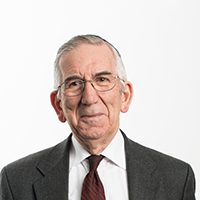 Ian Smith has been a member of the academic staff since 1962 and currently holds the position of Professor of Applied Thermodynamics in the Department of Mechanical Engineering. He received the degree of BSc in Mechanical Engineering at the University of Cape Town, following which he obtained a diploma in Gas Turbine Technology at Imperial College, London, a PhD from the University of London and, more recently, the degree of DSc from City, University of London. Prior to coming to City, he spent three years in the aircraft gas turbine industry.

Since his appointment at City, he pioneered the first MSc course in the Department of Mechanical Engineering and initiated research in the recovery of power from low grade heat sources, which has been his main field of interest and in which he is an acknowledged expert. Resulting from this, he formed the Centre for Positive Displacement Compressor Technology in 1995, together with Professor Nikola Stosic, and this is now recognised as an international centre of excellence in twin screw machines. As a result of his and Nikola Stosic’s work in this area, Heliex Power Ltd, a spin out company was formed to commercialise their work in 2009.