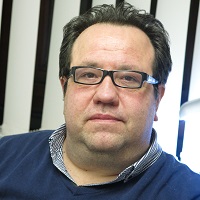 Dr Halikias was born in Athens, Greece in December 1961. He obtained his undergraduate degree in Engineering Science from Magdalen College, Oxford University in July 1983. He then studied Control Systems Engineering at the Department of Electronic and Electrical Engineering at Imperial College, London, and was awarded his M.Sc. and Ph.D. degrees in October 1984 and May 1990, respectively.

Between January 1988 and July 1991 he was a member of the Industrial Systems Group at Imperial College and worked as a Research Engineer for Greycon Consultants and as a Research Fellow at the Interdisciplinary Research Centre of Process Systems Engineering. Between July 1991 and August 2000 he was a Lecturer in Control Systems at the Department of Electronic and Electrical Engineering, University of Leeds.

In September 2000 he joined City University as Senior Lecturer in Systems, Modelling and Control Theory, and in August 2008 he was appointed Reader in Control Engineering. His main research interests are in the areas of Robust Control, Systems theory, Multivariable systems design, Model reduction, Convex Optimisation and Modelling and Control applications in the areas of Networks, Mechanical Systems, Business Processes and Supply Chains. He is a member of IEEE and IET, Academic Secretary of IMA's Control Theory Group and Associate Editor of the IMA Journal of Mathematical Control and Information.