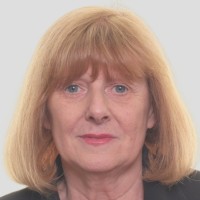 Dr Evelyn Pollock is a Barrister and a Registered Medical Practitioner. She is a part time lecturer on the Bar Professional Training Course at City Law School and until her recent retirement was in practice, as a barrister, at Hailsham Chambers, Temple, London.

Initially, she qualified in medicine from Edinburgh University and went on to specialise in anaesthesia and intensive care medicine with a particular interest in paediatric intensive care. While working in the Hospital for Sick Children, Toronto Canada she undertook research which was later compiled as a thesis entitled “Nosocomial infection in the Paediatric Intensive Care Unit”. The thesis was accepted by the University of Edinburgh for the degree of Doctor of Medicine.

Evelyn Pollock was called to the Bar by Inner Temple in 1991. She undertook pupillage at 6 Kings Bench Walk (Chambers of Mr Michael Worsley QC where she was pupil to the Junior Treasury Counsel, Mr David Spens. Thereafter, she developed a practice in general civil law specialising, later, almost entirely in clinical negligence work. She became a tenant at Hailsham Chambers in 2000.

On the BPTC, she teaches a number of skills subjects on the civil streams namely opinion writing, drafting and civil advocacy. She also teaches and is subject coordinator for Professional Negligence Litigation, a term 3 option subject. She supervises and assesses candidates on the LLM in Professional Legal Skills programme. In the past she has acted as a Supervisor in the Pro Bono / Student Advice Clinic.

Evelyn has a particular interest in access to and training for the Bar. She is a member of the Outreach Sub Committee of the Education and Training Committee of the Inner Temple. The remit of this committee is to establish and monitor the Inn’s strategy for recruitment of students for membership of the Inn and entry to the Bar. She participates regularly in advocacy training sessions provided by Inner Temple for new practitioners.

She has held a number of public appointments sitting in a judicial capacity as H.M. Deputy Coroner (Greater London Southern District) from 1994 to 2000 and as Chairman of the Social Security Appeals Tribunal (part time). She has acted as a Legal Assessor to the General Medical Council and until 2013 she was a barrister member of the Bar Disciplinary Tribunal.