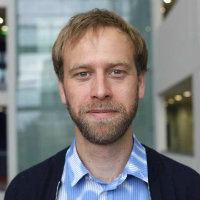 Erik Nyström is a composer working in the field of electroacoustic and computer music. The majority of his works are created for multichannel sound projection, and among the recurring interests in his practice are synthetic sound, spatiotemporal processes, texture perception, and visual and physical listening experiences. His current practice is focused on live performance using interactive algorithmic systems for spatial sound synthesis.

During 2015-18 he held a Leverhulme Early Career Fellowship at BEAST (Birmingham Electroacoustic Sound Theatre) University of Birmingham where he developed aesthetic and technological approaches to multichannel synthesis and live performance in the project Synthesis of Spatial Texture Topology in Composition and Performance.

He studied with Denis Smalley at City University for both MA and PhD degrees, where he was awarded the The Merciful Company Cordwainer's Prize for Outstanding Achievement on the MA Programme. and Mercer's Music Prize for Most Outstanding Achievement on the PhD Programme. In 2010 he won the Audience Prize at Metamorphoses International Electroacoustic Composition Competition, Brussels.

His theoretical work concerns texture, spatiality, sound synthesis, and algorithmic music and has been published in Organised Sound, EContact! and ICMC Proceedings.

His music is performed worldwide and he has presented both theoretical and artistic work at conferences such as ICMC, SMC, NIME, and Beyond Humanism.

In 2014 his music was released by empreintes DIGITALes on the disc Morphogénèse,