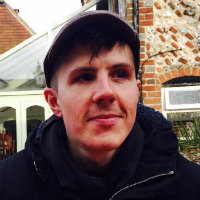 Dr Dom Davies joined City as a Lecturer in English in April 2018 and was promoted to Senior Lecturer in August 2020. He teaches across the BA in English as well as the department's new MA in English. He is committed to teaching English Literature in a way that is politically informed, socially inclusive, and critically generative.

Dom's research focuses on the broad themes of colonial, postcolonial, and world literature, imperial and post-imperial cultures, and critical race studies. He has also published in the field of urban cultural studies and written about visual responses to migration and refugees, especially in comics and graphic narratives. More generally, his research focuses on the relationship between infrastructures, borders, urban planning, the built environment, and literary and cultural narratives. He welcomes applications from prospective PhD students interested in working on any of these or similar themes.

Dom represents the School of Arts and Social Sciences on City's Race and Equality Charter Self-Assessment Team. He also sits as Co-Chair on the Student Attainment Working Group. He is the English Department's Senior Tutor for Learning, as well as the Careers and Events Officer.

Dom is the co-editor with Professor Elleke Boehmer, of Planned Violence: Post/Colonial Urban Infrastructure, Literature & Culture (Palgrave Macmillan, 2018), and with Drs Erica Lombard and Ben Mountford, of Fighting Words: Fifteen Books that Shaped the Postcolonial World (Peter Lang, 2017). Most recently, he is the co-editor with Professor Candida Rifkind of a collection of essays and artworks, Documenting Trauma in Comics: Traumatic Pasts, Embodied Histories and Graphic Reportage (Palgrave Macmillan 2020).

Dom holds a DPhil and British Academy Postdoctoral Fellowship from the University of Oxford, and is committed to interdisciplinary teaching and research. He has facilitated and convened a number of international research projects, networks and conferences. He is always happy to hear from people with similar research interests, prospective PhD students, and those interested in collaborating on future projects.