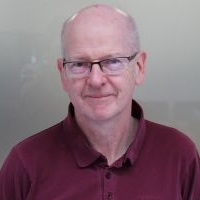 Following a first degree in maths at Queens University Belfast, Dave studied optometry (or ophthalmic optics as it was then) at City University. After a pre-registration year at Moorfields Eye Hospital, and a short time in hospital and locum practice, Dave joined the staff at City University in 1977. He has been with City since then and is currently Emeritus Professor.

Fellow of the College of Optometrists since 1980

I am a member of the Ophthalmic Public Health Research Group within the Division of Optometry and Visual Science.
My current Research interests include:
- Models of ophthalmic service delivery.
- Glaucoma.
- Prevalence of visual impairment in people with dementia.
- Improving clinical decision making in optometry.
- Standardised patients in optometry.

2012 - 2014. Co-applicant on project to investigate "The prevalence of visual impairment in people with dementia" funded by NIHR (£447K). PI is Mike Bowen (College of Optometrists).

2011 -2014. Collaborator on the "Equipment and Eyecare" project funded by the College of Optometrists and Optivue Inc. (£92K) PI is John Lawrenson (City University).

Thesis title: Equipment and its impact on eye care

Further information: A College of Optometrists funded grant for "Equipment and its impact on eye care" which is evaluating the impact of modern technology on current optometric practice using quantitative and qualitative methods.