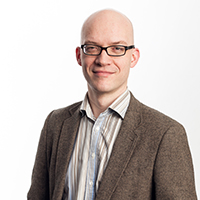 David is a research scientist with a strong interest in natural and artificial intelligence. After his PhD in machine learning, he has worked in several areas including visual neuroscience, computational linguistics, image processing, botanical taxonomy and most recently, online social networks and journalism. In each case, he has helped to develop robust solutions to complex, data-centred problems.

I am currently part of the SocialSensor consortium (FP7), researching how to find and make good use of user-generated input from online social networks. I'm part of a team researching how to find interesting news stories from the huge streams of information available through Twitter, Reddit, Facebook and other online social networks. We're collaborating with journalists from the Department of Journalism and with universities and industrial partners across Europe to produce useful, real-time software. I'm based jointly at Robert Gordon University (Senior RF) and the City University London (Honorary RF).