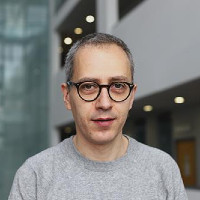 Reader in Media and Communication

Dr Mercea has a lasting interest in the implications of new media usage, the adoption and repurposing of Internet technologies in various domains of social and political activity as captured by multiple analytical perspectives including those in social movement, political behaviour, political and social psychology, science and technology studies. More specifically, his theoretical preoccupations have converged on cultural aspects of mobilization into collective action and informal civic learning; media theory with an emphasis on (new) media practices; democratic theory chiefly with reference to deliberative and participatory models of political engagement and finally sociological theory probing the interplay between technological innovation and social transformation.

His empirical research has concentrated on participation in contentious politics. In his recent studies, he has focused on the impact of networked communication on individual involvement in physical protest; on notions of shared collective identities among networked participants and finally, on organizational changes among digitally connected activist groups.

Dr Mercea is happy to supervise postgraduate work that touches on his areas of interest.