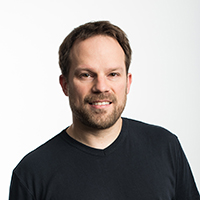 Chris Child developed the International Cricket Captain game series for PC, PlayStation and iPhone and has been working in the gaming industry for over fifteen years. After several years at Empire and Logica CMG he now runs his own computer game company 'Childish Things Ltd' where he's involved in every stage of computer game production from game design, game programming, motion capture, writing manuals, right through to advertising and marketing.

Chris has been a games technology lecturer since 2005, and became course director of the Computer Games BSc at City in 2012 and the MSc in 2008. His aim has been to bridge the skills gap between talented graduate and industry programmers and the requirements of game companies. Chris is also a researcher in the Department of Computer Science at City University, developing cutting edge game agent AI using techniques such as reinforcement learning, probabilistic planning, environment modelling and approximate dynamic programming.

Chris can currently be found developing the next generation of computer game designers at City University London, where he lectures on undergraduate and postgraduate courses in computer games technology.

My research is centred on the automated creation of intelligent agents for computer game environments, from the level of non-play characters in RPG or "god" games, to squad leaders and artificial opponents. The work is also applicable to a range of agent and robotics applications. My Ph.D. and publications focus on agents which build a stochastic rule based model from experience in an artificial environment which is either inherently random or random from the limited perspective of the agent's perception. This model is then used as the basis for a reinforcement learning algorithm (rule value reinforcement learning) which attaches value to each rule enabling the agent to pick an action in a given situation based on the values of rules with conditions matching the current state. Both the stochastic rule learning and rule value reinforcement learning algorithms are novel contributions. My future research interests include integrating agent research into commercial games and software engineering techniques for games.