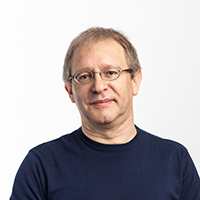 Professor Andreas Fring studied physics at the Technische Universität München and the University of London. He received a PhD in theoretical physics in 1992 from Imperial College London. He became a member of the Department of Mathematics in 2004, where he was promoted to Reader in 2005 and subsequently to Professor of Mathematical Physics in 2008.

Before joining City University London he held postdoc positions between 1992 and 1994 at the Universidade de São Paulo (São Carlos, Brazil) and the University of Wales (Swansea, UK). From 1994 until 2004 he was Wissenschaftlicher Mitarbeiter in the Department of Physics at the Freie Universität Berlin.

Further information: This thesis is based on the work done during my PhD studies and is roughly divided in two independent parts. The first part consists of Chapters 1 and 2 and is based on the two papers Cavaglià et al. [2011] and Cavaglià & Fring [2012], concerning the complex PT-symmetric
deformations of the KdV equation and of the inviscid Burgers equation, respectively. The second part of the thesis, comprising Chapters 3 and 4, contains a review and original numerical studies on the properties of certain quasilinear dispersive PDEs in one dimension with compacton solutions.

The subjects treated in the two parts of this work are quite different, however a common theme, emphasised in the title of the thesis, is the occurrence of nonsemilinear PDEs. Such equations are characterised by the fact that the highest derivative enters the equation in
a nonlinear fashion, and arise in the modeling of strongly nonlinear natural phenomena such as the breaking of waves, the formation of shocks and crests or the creation of liquid drops. Typically, nonsemilinear equations are associated to the development of singularities and
non-analytic solutions. Many of the complex deformations considered in the first two chapters
are nonsemilinear as a result of the PT deformation. This is also a crucial feature of the compacton-supporting equations considered in the second part of this work.

This thesis is organized as follows. Chapter 1 contains an introduction to the field of PT-symmetric quantum and classical mechanics, motivating the study of PT-symmetric deformations of classical systems. Then, we review the contents of Cavaglià et al. [2011] where we explore travelling waves in two family of complex models obtained as PT-symmetric deformations of the KdV equation. We also illustrate with many examples the connection between the periodicity of orbits and their invariance under PTsymmetry.

Chapter 2 is based on the paper Cavaglià & Fring [2012] on the PTsymmetric deformation of the inviscid Burgers equation introduced in Bender & Feinberg [2008]. The main original contribution of this chapter is to characterise precisely how the deformation affects the
gradient catastrophe. We also point out some incorrect conclusions of the paper Bender & Feinberg [2008].

Chapter 3 contains a review on the properties of nonsemilinear dispersive PDEs in one space dimension, concentrating on the compacton solutions discovered in Rosenau & Hyman [1993]. After an introduction, we present some original numerical studies on the K(2, 2) and K(4, 4) equations. The emphasis is on illustrating the different type of phenomena exhibited by the solutions to these models. These numerical experiments confirm previous results on the properties of compacton-compacton collisions. Besides, we make some original observations,
showing the development of a singularity in an initially smooth solution.

In Chapter 4 , we consider an integrable compacton equation introduced by Rosenau in Rosenau [1996]. This equation has been previously studied numerically in an unpublished work by Hyman and Rosenau cited in Rosenau [2006]. We present an independent numerical study, confirming the claim of Rosenau [2006] that travelling compacton equations to this equation do not contribute to the initial value problem. Besides, we analyse the local conservation laws of this
equation and show that most of them are violated by any solution having a compact, dynamically evolving support. We confirm numerically that such solutions, which had not been described before, do indeed exist.

Finally, in Chapter 5 we present our conclusions and discuss open problems related to this work.

Further information: Intuitive arguments involving standard quantum mechanical uncertainty relations suggest that at length scales close to the Planck length, strong gravity effects limit the spatial as well as temporal resolution smaller than fundamental length scale, leading to space-space as well as spacetime uncertainties. Space-time cannot be probed with a resolution beyond this scale i.e. space-time becomes "fuzzy" below this scale, resulting into noncommutative spacetime. Hence it becomes important and interesting to study in detail the structure of such noncommutative spacetimes and their properties, because it not only helps us to improve our understanding of the Planck scale physics but also helps in bridging standard particle physics with physics at Planck scale.

Our main focus in this thesis is to explore different methods of constructing models in these kind of spaces in higher dimensions. In particular, we provide a systematic procedure to relate a three dimensional q-deformed oscillator algebra to the corresponding algebra satisfied by canonical variables describing non-commutative spaces. The representations for the corresponding operators obey algebras whose uncertainty relations lead to minimal length, areas and volumes in phase space, which are in principle natural candidates of many different approaches of quantum gravity. We study some explicit models on these types of non-commutative spaces, in particular, we provide solutions of three dimensional harmonic oscillator as well as its decomposed versions into lower dimensions. Because the solutions are computed in these cases by utilising the standard Rayleigh-Schrodinger perturbation theory, we investigate a method afterwards to construct models in an exact manner. We demonstrate three characteristically different solvable models on these spaces, the harmonic oscillator, the manifestly non-Hermitian Swanson model and an intrinsically non-commutative model with Poschl-Teller type potential. In many cases the operators are not Hermitian with regard to the standard inner products and that is the reason why we use PT -symmetry and pseudo-Hermiticity property, wherever applicable, to make them self-consistent well designed physical observables. We construct an exact form of the metric operator, which is rare in the literature, and provide Hermitian versions of the non-Hermitian Euclidean Lie algebraic type Hamiltonian systems. We also indicate the region of broken and unbroken PT -symmetry and provide a theoretical treatment of the gain loss behaviour of these types of systems in the unbroken PT -regime, which draws more attention to the experimental physicists in recent days.

Apart from building mathematical models, we focus on the physical implications of noncommutative theories too. We construct Klauder coherent states for the perturbative and nonperturbative noncommutative harmonic oscillator associated with uncertainty relations implying minimal lengths. In both cases, the uncertainty relations for the constructed states are shown to be saturated and thus imply to the squeezed coherent states. They are also shown to satisfy the Ehrenfest theorem dictating the classical like nature of the coherent wavepacket. The quality of those states are further underpinned by the fractional revival structure which compares the quality of the coherent states with that of the classical particle directly. More investigations into the comparison are carried out by a qualitative comparison between the dynamics of the classical particle and that of the coherent states based on numerical techniques. We find the qualitative behaviour to be governed by the Mandel parameter determining the regime in which the wavefunctions evolve as soliton like structures. We demonstrate these features explicitly for the harmonic oscillator, the Poschl-Teller potential and a Calogero type potential having singularity at the origin, we argue on the fact that the effects are less visible from the mathematical analysis and stress that the method is quite useful for the precession measurement required for the experimental purpose. In the context of complex classical mechanics we also find the claim that "the trajectories of classical particles in complex potential are always closed and periodic when its energy is real, and open when the energy is complex", which is demanded in the literature, is not in general true and we show that particles with complex energies can possess a closed and periodic orbit and particles with real energies can produce open trajectories.

Further information: The thesis provides several different systematic methods for constructing complex root spaces that remain invariant under an antilinear transformation. The first method is based on any element of the Weyl group, which is extended to factorizations of the Coxeter element and a reduced Coxeter element thereafter. An antilinear deformation method for the longest element of the Weyl group is provided. The last construction method leads to an alternative construction for q-deformed roots. Completed in 2012.

Further information: This thesis is centred around the role of non-Hermitian Hamiltonians in Physics both at the quantum and classical levels. In our investigations of two-level models we demonstrate [1] the phenomenon of fast transitions developed in the PT -symmetric quantum brachistochrone problem may in fact be attributed to the non-Hermiticity of evolution operator used, rather than to its invariance under PT operation. Transition probabilities are calculated for Hamiltonians which explicitly violate PT -symmetry. When it comes to Hilbert spaces of infinite dimension, starting with non-Hermitian Hamiltonians expressed as linear and quadratic combinations of the generators of the su(1; 1) Lie algebra, we construct [2] Hermitian partners in the same similarity class. Alongside, metrics with respect to which the original Hamiltonians are Hermitian are also constructed, allowing to assign meaning to a large class of non-Hermitian Hamiltonians possessing real spectra. The finding of exact results to establish the physical acceptability of other non-Hermitian models may be pursued by other means, especially if the system of interest cannot be expressed in terms of Lie algebraic elements. We also employ [3] a representation of the canonical commutation relations for position and momentum operators in terms of real-valued functions and a noncommutative product rule of differential form. Besides exact solutions, we also compute in a perturbative fashion metrics and isospectral partners for systems of physical interest. Classically, our efforts were concentrated on integrable models presenting PT - symmetry. Because the latter can also establish the reality of energies in classical systems described by Hamiltonian functions, we search for new families of nonlinear differential equations for which the presence of hidden symmetries allows one to assemble exact solutions. We use [4] the Painleve test to check whether deformations of integrable systems preserve integrability. Moreover we compare [5] integrable deformed models, which are thus likely to possess soliton solutions, to a broader class of systems presenting compacton solutions. Finally we study [6] the pole structure of certain real valued nonlinear integrable systems and establish that they behave as interacting particles whose motion can be extended to the complex plane in a PT -symmetric way.