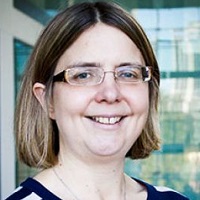 Alison became a lecturer in the Division of Optometry and Visual Science at City University London in July 2013. Her specialism is the early detection and treatment of Age-Related Macular Degeneration. Alison gained a degree in Optometry and Vision Sciences at Cardiff University in 1998.

After passing Professional Qualifying Examinations, and working for several years as an Optometrist, she returned to Cardiff University to obtain a PhD investigating the electrophysiological characteristics of early age-related macular degeneration (AMD), and continued to work in the School of Optometry and Vision Sciences from 2004-2013.

For the past 13 years, Alison has been carrying out research into the most sensitive clinical tools for the diagnosis and monitoring of AMD and, more recently, into treatments for early AMD. In July 2013, Alison became a lecturer in the Division of Optometry and Visual Science in City University London, where she continues to carry out both research and teaching roles.

Alison's principal research interest is age-related macular degeneration (AMD). Approximately 500,000 people in the UK have advanced AMD, and it is responsible for more than half of all registrations as sight impaired or severely sight impaired. Her research is targeted at the early stage of AMD, aiming to develop treatments to prevent progression to the sight-threatening form of the disease, and to identify sensitive biomarkers. Alison is also interested in the evaluation of low vision service provision for people with visual impairment, and has conducted two significant systematic reviews in the field. A further area of research interest is the evaluation of retinal adaptation using electrophysiology, psychophysics and imaging techniques. She considers this to be an important area of research, given the sensitivity of measures of retinal adaptation to early stages of retinal disease, including AMD.

AMD light trial (ALIGHT): an exploratory phase I/IIa clinical trial investigating the effect of low level illumination at night on the progression of AMD. Oxygen consumption of the retina is reduced by exposing the eye to low illumination during sleep, thus minimising retinal hypoxia. This is a collaboration with Cardiff University (Dr Tom Margrain), Bristol Eye Hospital (Miss Clare Bailey), and Polyphotonix Medical Ltd. Funded by the College of Optometrists.

Development of retinal imaging densitometer: The design, development and evaluation of a new retinal imaging densitometer in a collaborative project with Cardiff University and the UK Astronomy and Technology Centre (UKATC). The densitometer measures reflectance of light from the retina to objectively evaluate the recovery of photopigment after exposure to a bright adapting light. The collaboration with UKATC permits the use of 'cutting edge' astronomical imaging technology to generate, for the first time, a topographical map of photopigment regeneration. This project is funded by the NIHR I4I scheme.

Evaluation of functional biomarkers for the early detection and monitoring of autosomal dominant optic atrophy: in collaboration with Professor Marcela Votruba and Dr Tom Margrain at Cardiff University.

Investigation of the effect of hypoxia on retinal function in AMD: Literature suggests that lack of oxygen at the outer retina may be responsible for the functional deficits seen in AMD. However, this hypothesis has never been directly evaluated. The effect of inhalation of supplementary oxygen on a range of visual functions will be investigated, as will the effect of background light level on hypoxia in AMD. This project is supported by the Cardiff University Endowment Scholarship.

Alison has also received grant funding from the Macular Society and the RNIB.